When firing back at Garcelle Beauvais and her co-hosts for criticizing his nearly 30 acres of land as a birthday gift from his girlfriend, the 'Wockesha' rapper suggests the show hosts to 'mind ya business.'

AceShowbiz - MoneyBagg Yo is clapping back at Garcelle Beauvais and other "The Real" co-hosts. After being criticized for his nearly 30 acres of land as a birthday treat from his girlfriend Ari Fletcher, the "Rookie of the Year" rapper said that the show hosts "fancy hating" on his lavish gift.

In a recent episode of the daytime talk show, Garcelle and her co-hosts discussed MoneyBagg's lavish birthday gift from Ari. Considering the couple isn't even married, Garcelle said, "Last year, last season, [Loni Love] and I were talking about, 'Don't act married if you're not married.' " She continued, "This is acting married! That's a huge gift to someone that you're not even married to. I feel like, if a man gave me twenty-eight acres, I would feel obligated to stay with them if it didn't work."

After Garcelle's statement aired, MoneyBagg, whose real name is DeMario DeWayne White Jr., took to his Twitter account on Tuesday, September 28 to rant, "Love is Love Mind Ya Business." In a separate post, the 30-year-old hip-hop artist wrote, "Not Fancy hating on my gift."

MoneyBagg's girlfriend Ari also slammed Garcelle for criticizing her over the birthday treat. "Y'all don't know the half of what he does for me mentally or financially. I've never felt so safe, loved, spoiled and happy with a person," said the Instagram influencer about her rapper boyfriend.

"He loves me and my son so much," Ari further stressed. She then sarcastically added, "I'm sorry that you haven't experienced a love like this. Focus on getting your own land and your husband." In a separate post, the social media star continued to fume, "Y'all mad at [jewelry] and cars but generational wealth is taking it too far... people will always have something to say no matter what." 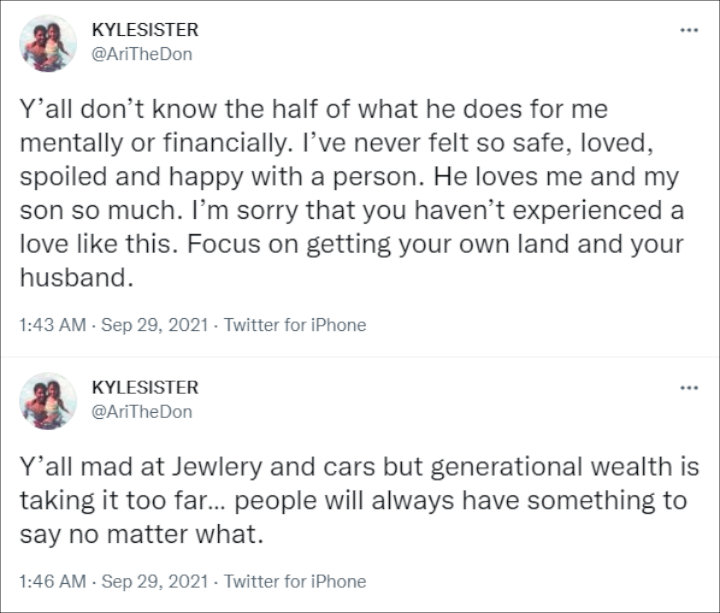 MoneyBagg celebrated his birthday on September 22. In addition to receiving 28.8 acres of picturesque Memphis real estate from his girlfriend, the "Wockesha" rapper was spoiled by Yo Gotti and Marcus "Head" Howell with $1.5 million cash and a brand new Rolex watch.

Moneybagg Yo Spoiled With $1.5M and Nearly 30 Acres of Land on His 30th Birthday

Moneybagg Yo Gets His First No. 1 Album on Billboard 200 Chart With 'A Gangsta's Pain'