In addition to saying sorry to the Swedish-Ethiopian chef, who won Bravo's 'Top Chef Masters' in 2010, the 'Scream Queens' alum insists that she has 'different taste buds.'

AceShowbiz - Keke Palmer is still not a fan of the Met Gala dinner menu. After chef Marcus Samuelsson defended the food following her criticism, the former "Scream Queens" star apologized to him for the negative review.

On Wednesday, September 15, the 38-year-old actress took to her Twitter account to say sorry for her criticism of the dinner menu. While responding to a fan who wrote, "Honestly, if KEKE PALMER has anything negative to say, I absolutely believe her," the star replied, "I just have different taste buds! I love this Chef, sorry to this man."

In a following tweet, Keke penned, "I hope all you guys know I see all the Met Gala love and Black Twitter, y'all always give me a Ki honey, pun intended. I love you guys and thank you for seeing my overly Virgo a**." The "Hustlers" actress elaborated further, "But y'all be wishy washy on the innanets so I know y'all might get funny tomorrow but I receive the love today hahahahaha." 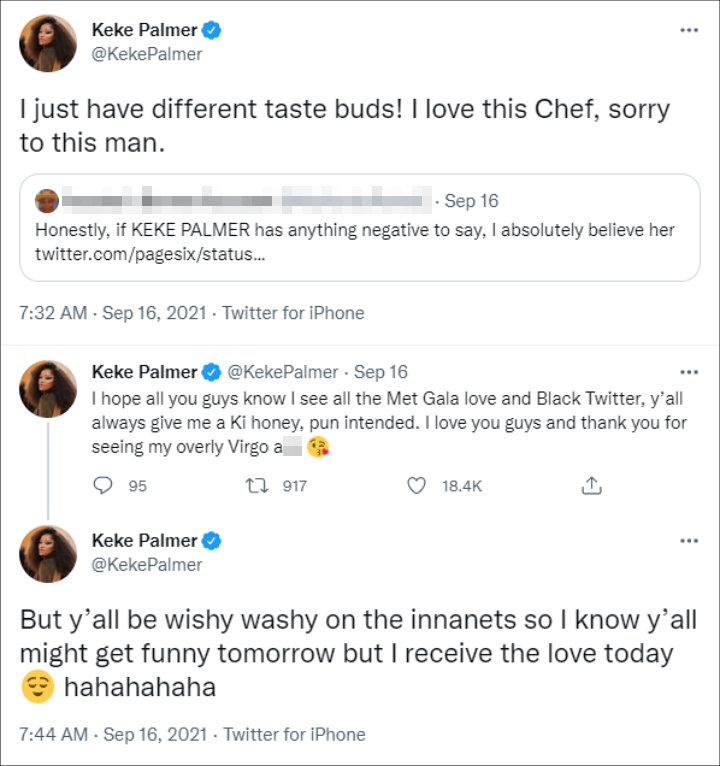 Keke's apology came after chef Marcus defended the food following the actress' comment that went viral. The Swedish-Ethiopian chef, who won Bravo's "Top Chef Masters" in 2010, told TMZ that what on Keke's plate was barley soup topped with roasted mushrooms, tomato salad with corn and zucchini slices. The chef, who helped select the 10 up-and-coming chefs who created the Met Gala menu, claimed it tasted "plenty good."

Marcus also stated that he, in collaboration with Bon Appetit, "selected and then challenged 10 NY chefs to create a sustainable, plant-based menu, hence all the fruits and veggies." He then said "the 3-course meal was delicious and the feedback he got has been incredible."

Keke previously took to her Instagram Story to share a photo of the sad-looking dinner served at the Monday, September 13 event, which ticket cost $30k-$50k. "This [is] why they don't show y'all the food," she captioned an image of what appeared to be a touch of risotto, a few tomatoes and pieces of sweetcorn, a few slices of cucumber and one mushroom on a posh plate. "I'm just playinnnn," she added.

Additionally, when a Twitter user asked her to spill some "tea" about the menu, the actress replied, "The menu chile." The meal was reportedly made by Two-Michelin-starred Aquavit chef Emma Bengtsson and Junghyun Park, who runs ATOBOY NYC, according to Daily Mail.