On the same day Ye hosts his third listening party for his tenth studio album, pictures surface of the Roc Nation founder all smiles when heading out to his 40/40 Club in New York City.

AceShowbiz - Jay-Z doesn't seem to be bothered by the fact that Kanye West is excluding him from the latter's upcoming album. On the same day the Atlanta native hosted his third "Donda" listening party, photos surfaced of the Roc Nation founder looking in good spirits in New York.

In the snaps, the 51-year-old was all smiles while heading out to his 40/40 Club in New York City. For the solo outing, the rapper dressed down in a short-sleeved white shirt and dark pants, teamed with white sneakers. He also sported black sunglasses and accessorized with a blue watch while carrying a bag of cigars. 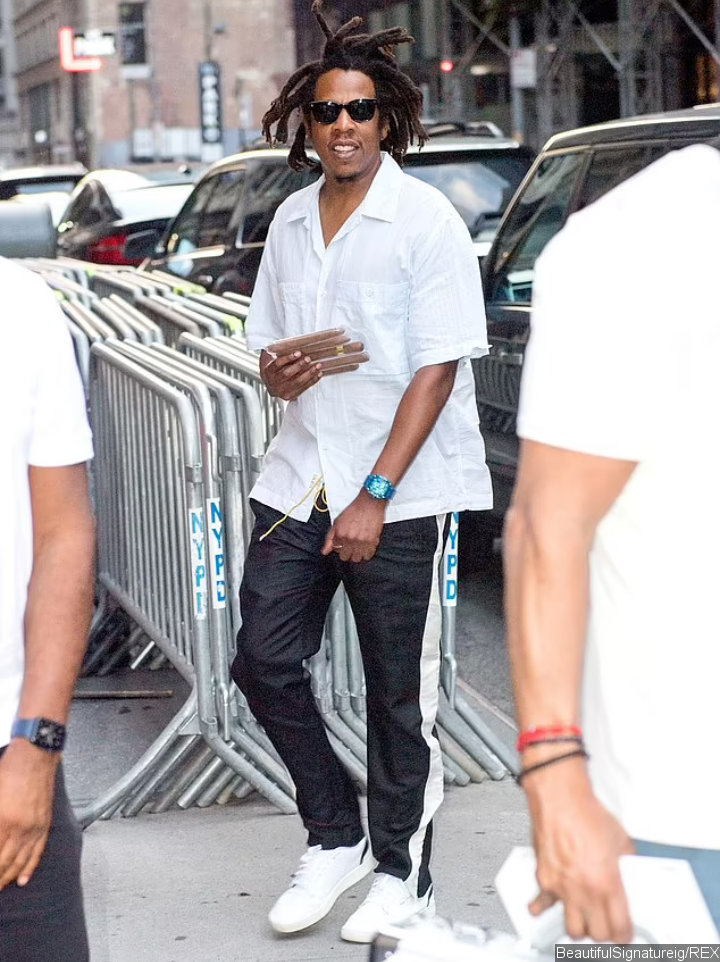 According to Daily Mail which obtained the pictures, the images were taken just a day after a Tiffany campaign which featured him and his wife Beyonce Knowles was unveiled. While the exact timeline was not given, the controversial ad was posted on the R&B diva's on Sunday, August 22, which means he may not have been aware that his verse was removed from Kanye's upcoming album by the time he stepped out for the solo outing.

Meanwhile, Kanye surprised his fans on Thursday, August 26 when he brought out two embattled artists, DaBaby and Marilyn Manson, to his latest "Donda" event at Soldier Field in Chicago. Both controversial stars appeared alongside Ye on the front porch of the mockup home, which was surrounded by people dressed in Donda police gear and black SUVs. While DaBaby's verse appears to have replaced Jay-Z's which was heard at earlier shows, it's unclear how Marilyn is involved in the album.

Previously, fans saw Jay-Z's involvement in the album as a sign that the two rappers have called a truce. After learning that Jigga's verse has been removed from "Donda", some of them couldn't hide their disappointment.

"So Kanye really removed kid cudi and jay z from #donda and added dababy?" one person reacted on Twitter. Another asked in disbelief, "KANYE TOOK OUT JAY-Z FOR DABABY???" A third one fumed, "KANYE REALLY DROPPED JAY-Z FOR THIS MOTHERF**KER #DONDA."