The 'One Tree Hill' alum tweets, 'best of luck,' after photos of her estranged husband enjoying a beach outing with his female companion in Tulum, Mexico spread online.

AceShowbiz - Jana Kramer seemed to have things left to say to Mike Caussin. After her estranged husband was caught enjoying a beach outing with a new woman, the "One Tree Hill" alum appeared to throw shade at him with her social media posts.

On Monday, August 23, the TV star took to her Twitter account to share a cryptic post about what it takes to love. "Love can happen in a split second. Bondedness can't. That's the thing we learn the hard way. That love is not the end of the story. It's just the first chapter," the quote read. "The next chapters demand that we acknowledge our wounding, clear our emotional debris, strengthen our capacity for attachment, learn how to authentically relate, mature in the deep within."

"Chapter after chapter of refining our ability to meet love with a true heart," the wise words continued. "This is the work of a lifetime. Our opus of opening. How terrifying. How delightful." In a separate tweet, which has since been deleted, Jana wrote, "Best of luck is all I have to say."

Not stopping there, Jana also turned to her Instagram Story to let out posts about hope and being free. "Hope. You haven't wasted time when things don't work out. Yes, time has passed, and you can't get it back, but now, everything that happened taught you: you are worth so much more than that," the quote said.

"You have started to see that even though letting go was one of the hardest things you have ever had to do, now, you can focus on the path before you," the inspirational words went on. "Now, you can take deep breaths knowing that the mere fact that you're here means your story isn't over yet. You've had to say goodbye to so many things, and yet, here you are, still finding peace. Still pursuing growth and wisdom as you become who you were meant to be."

In a following Story, the host of iHeartRadio's "Whine Down" podcast shared other wise words about staying true to oneself. "You are free to be who you were meant to be no matter what others say or think," the quote stated. 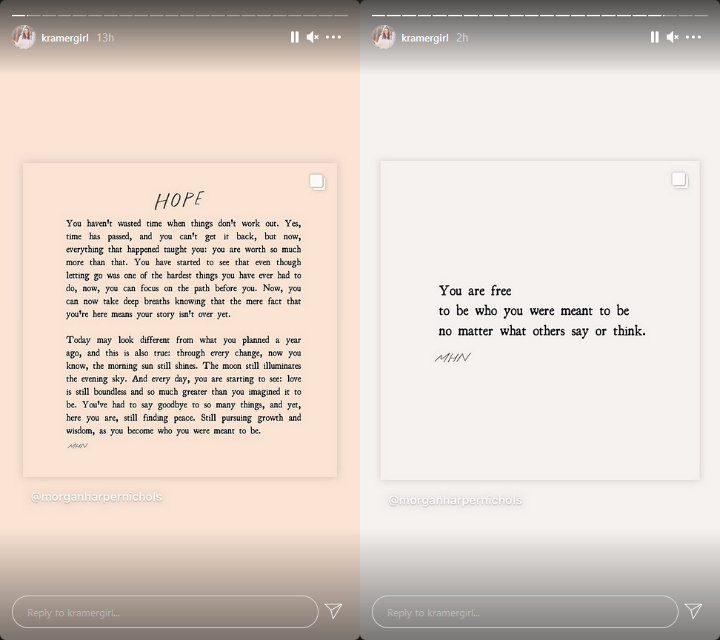 Her cryptic posts came after Mike was spotted hanging out with a mystery woman in Tulum, Mexico on Sunday, August 22. Instagram account @CocktailsAndGossip posted photos showing the former NFL player enjoying an afternoon by the beach with his female companion at Taboo Restaurant and Beach Club.

Jana filed for divorce from Mike in April after six years of marriage. In the divorce filing, she cited "inappropriate marital conduct, irreconcilable differences and adultery" as the reason of the split.

Following their split, a source said, "Jana has been making the kids her priority and their health and happiness will always be her focus." The insider further elaborated, "Being a good mother comes first and she will always do what's best for them." The exes share 5-year-old Jolie Rae and 2-year-old Jace Joseph together.

Brooke Shields Has Mixed Feeling About Sending Daughter Off to College

Jana Kramer and Jay Cutler Split After Things 'Fizzle Out'

Taraji P. Henson Claims She's 'Missing a Piece' of Her Lip Due to Abusive Relationship