The conservative political pundit seemingly agrees with The Babylon Bee CEO Seth Dillon that the artistic gymnast's act of quitting the competition is not a show of courage, but of weakness.

AceShowbiz - Candace Owens has weighed in on Simone Biles' decision to withdraw from Tokyo Olympic Games due to mental health issues. While many have shown their support for the gold medalist, the political commentator has appeared to throw shade at the athlete, suggesting she is a coward for quitting the competition.

Candace made her opinion be known to public as she commented on a tweet by The Babylon Bee CEO Seth Dillon, who criticized Simone's decision to pull out of the game. Seemingly agreeing with him, she sarcastically remarked, "Doing nothing is courage. Anyone who disagrees is a white supremacist. Welcome to 2021."

The tweet from Seth, meanwhile, read, "Simone Biles just said sitting out the big competitions shows how strong you really are. That's like saying soldiers who run away from battle are courageous. Cowardice is not courage; weakness is not strength. Great athletes understand this." 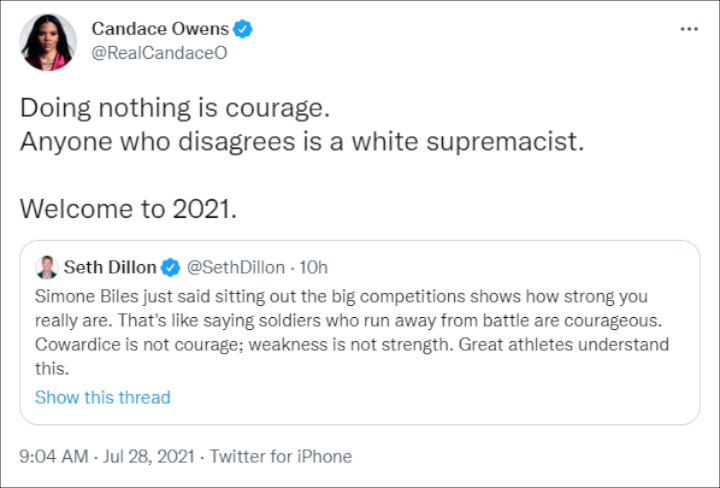 Candace Owens suggested Simone Biles is a coward for pulling out of Olympics.
See also...

Needless to say, Candace has caught heat for her take on the hot issue. "All of you have such bad takes on this," one person responded, before justifying Simone's decision, "This is not basketball. This is not softball. YOU CAN DIE in this sport. You apparently did not do it and cannot relate. When you get in your head you get hurt. Fear gets you hurt and it comes out of nowhere sometimes."

Another called her "vile," writing, "People who attack Simone for making a personal decision are vile." Someone else added, "I'm always so confused by you. I mean, you are articulate - or maybe that's just fluency because most of what you say is so nonsensical. Simone Biles chose to prioritize her mental health - how are you bothered by that. In 2021?"

Simone has not responded to Candace's comments. She previously announced her decision to withdraw from the Olympics on Tuesday, July 27, tearfully speaking in front of reporters, "My pride is hurt a little bit. After the (vault) performance that I did (on Monday), I didn't want to go into the other events so I thought I would take a step back." She added, "I have to focus on my mental health and not jeopardise my health and well-being."

Later in an interview with NBC's "Today", the 24-year-old admitted, "I'm OK, just super frustrated of how the night played out, but super proud of these girls that stepped up and did what they needed to do and now we're Olympic silver medalists, so it's something that we'll cherish forever." She also assured that "physically, I feel good, I'm in shape."

Simone has received support from the likes of Rosanna Arquette, Holly Robinson Peete as well as her former "Dancing with the Stars" partner Sasha Farber.