In the since-deleted snap, the 'Spider-Man: Homecoming' actress can be seen hanging out by the pool while her rumored beau and co-star is seen with his head barely above water.

AceShowbiz - Zendaya Coleman will not let Tom Holland steal fans' attention from her. After one of her social media followers put his/her focus more on her rumored beau instead of her in a pool picture, the "Spider-Man: Homecoming" actress set aside time to jokingly call out the individual.

Making use of Twitter on Friday, July 16, the 24-year-old let out a picture of her hanging out by the swimming pool while her "Spider-Man" co-star was seen in the background with his head barely above water. "Out here living my best life," she captioned the since-deleted post.

An eagle-eyed fan has since poked fun at Tom's position in the water. The user quipped, "Tom is drowning." Upon noticing the comment, "The Greatest Showman" star lightheartedly fired back, "This ain't about him." 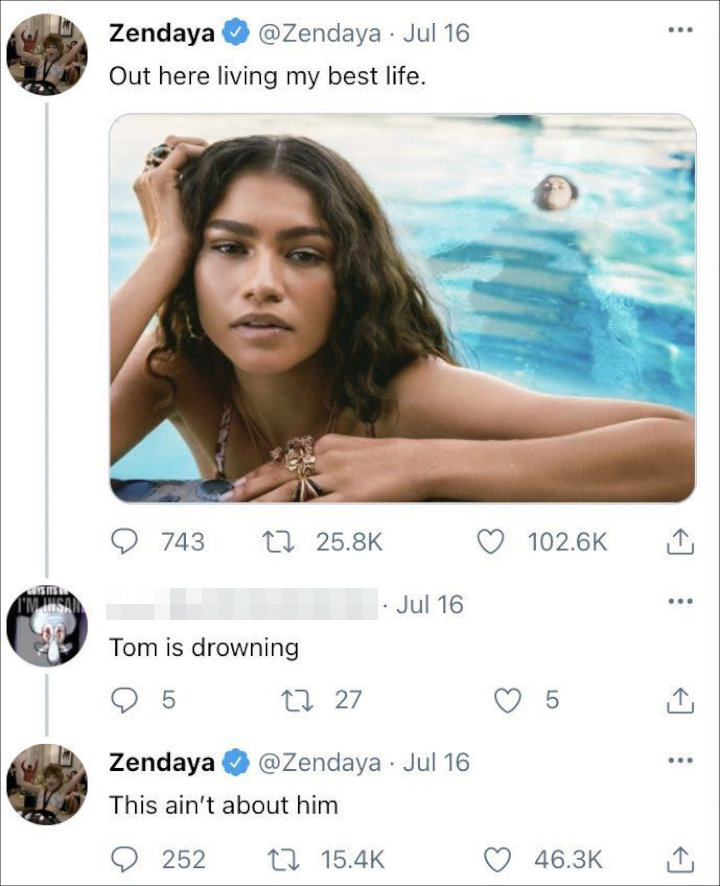 Zendaya Coleman jokingly called out a fan who focused more on Tom Holland instead of her in a new photo.
See also...

The post came more than two weeks after Zendaya and Tom were spotted locking lips in his car during a Los Angeles outing. In some photos obtained by Page Six, the English native could be seen tenderly holding his rumored girlfriend's face as they leaned in for a smooch.

Several days later, TMZ unleashed some pictures of the alleged couple while they were enjoying their meal at a Thai restaurant near Universal Studios in Los Angeles. The photographs were taken just one day before they were seen sharing the passionate kiss.

Tom and Zendaya were first linked romantically after filming 2017's "Spider-Man: Homecoming". At the time, a source told PEOPLE, "They started seeing each other while they were filming 'Spider-Man'. They've been super careful to keep it private and out of the public eye but they've gone on vacations with each other and try and spend as much time as possible with one another."

The pair, however, had previously denied the dating speculations. They also have yet to comment on the recent relationship news.