When firing back at trolls accusing her of tanning her skin to look darker, the Australian-born femcee insists she wears the 'same shade in every music video since 'Sally Walker'.'

AceShowbiz - Iggy Azalea continued to fire back at trolls criticizing her over the "I Am the Stripclub" music video. Having been accused of blackfishing because she allegedly tanned her skin to look darker in the clip, the Australian-born femcee dubbed the allegation "ridiculous."

The 31-year-old offered her clapback via Twitter on Sunday, July 4. "I can't care about something that ridiculous and baseless. I'm wearing a shade 6 in armarni foundation, it's the same shade I've worn for the last 3 years. It's the same shade in every music video since 'Sally Walker'. Suddenly I wear a black wig in a club scene & its an issue," she first tweeted.

"I don't see an issue with 'Sally Walker', 'Started', 'F**k It Up', 'Sip 'It', 'Brazil' or any other look in this music video being spoken about in that way," the raptress, whose real name Amethyst Amelia Kelly, added. "It's the same fondation, so anyone who wants to reach can go ahead - y'all (weirdos online to clarify) love to do that, continue!" 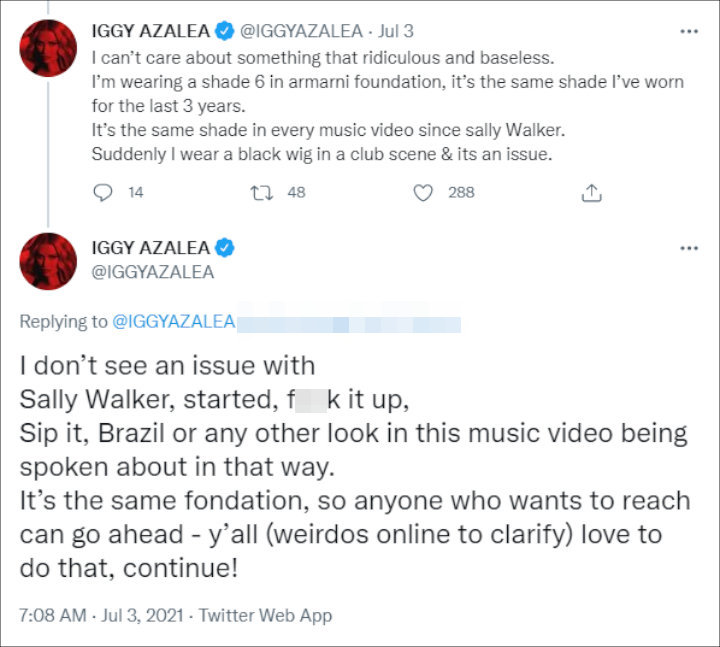 Iggy Azalea continued firing back at trolls accusing her of blackfishing with 'I Am the Stripclub' music video.
See also...

Iggy, however, also set aside time to thank her fans who came into her defense. After one individual urged her to ignore the haters, she replied, "Honestly! Thankyou. F**king hell. It's always an issue, when it's ME. I mind my business - just leave me be. Ppl on here love to twist what I do and say and it's pointless. It changes nothing about my life."

Another follower went on to suggest that Iggy better focuses on her music instead of the criticism. In response, she wrote back, "Love you and don't worry, I promise nonsense on the internet is something I'm very used to. People picking at me is expected. It genuinely does not change my day." 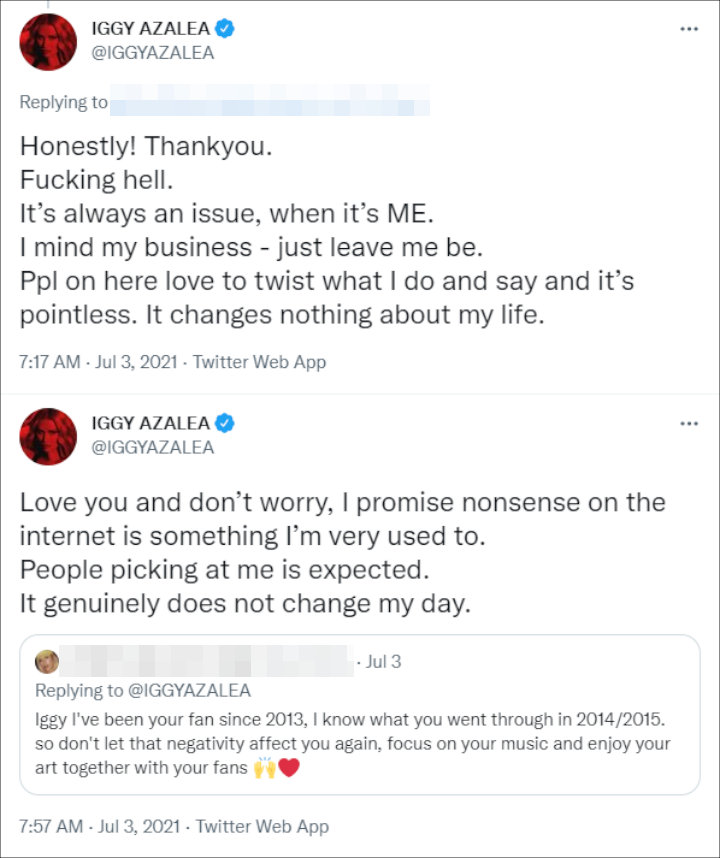 Iggy Azalea thanks fans for their support amid the backlash.

Iggy has previously addressed the blackfishing accusation. The "Fancy" hitmaker said she doesn't care with it and "f**k those ppl." She further raged in another post, "The internet stay trying to read into sh*t that's really not that deep."

Iggy then clarified to whom she referred her first tweet. She explained, "Those people is anyone that has a problem with the fact that I wore a black wig and performed in a dimly lit room but have nothing to say about the same makeup in other scenes... not hard to understand [shrug emoji]."