The 'Wonder Woman' star has been accused of being a 'propaganda' tool after she neglected to mention Palestinians in a post addressing the ongoing conflict in the Middle East.

AceShowbiz - Gal Gadot refused to be bothered by critics over her attempt in calling for unity between Israel and Palestine. After ongoing conflict in the Gaza strip left dozens of people dead, the "Wonder Woman 1984" star issued a statement about the carnage on her social media accounts, but turned off the comments after facing backlash for it.

The 36-year-old actress become trending on Wednesday, May 12 for her Twitter and Instagram post addressing the violence. "My heart breaks," her message on both platforms read. "My country is at war. I worry for my family, my friends. I worry for my people. This is a vicious cycle that has been going on for far too long."

While the former Miss Israel called for unity, many noticed she failed to mention Palestinians since she referred to them only as "neighbors." Her post further read, "Israel deserves to live as a free and safe nation, our neighbors deserve the same. I pray for the victims and their families, I pray for this unimaginable hostility to end, I pray for our leaders to find the solution so we can live side by side in peace. I pray for better days."

Gadot's post put her under fire online. Some Twitter user have even accused her of being a "propaganda" tool. One user tweeted, "And people really said we were exaggerating when we said boycott Gal Gadot who acts as a literal tool of propaganda for her government and the occupation forces she once served in. She can't even say the word Palestinian. To the dustbin of history." 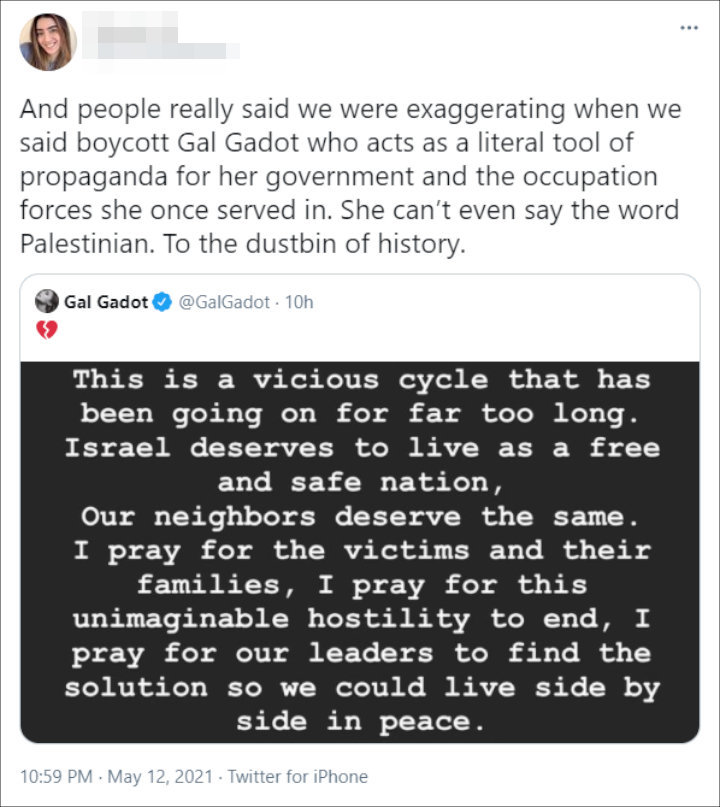 Others also took issue with Gadot's statement itself. Writer-activist Aaron Vallely tweeted, "Gal Gadot's statement is far worse than that tone-deaf imagine video from last year. 'Free and Safe'. The same state that is perpetrating military occupation, land theft and ethnic cleansing against the people of Palestine. #FreePalestine." Singer-songwriter James Kennedy tweeted, "Gal Gadot is wrong. Israel is not at 'war' with Palestine. Israel is butchering Palestine. Again." 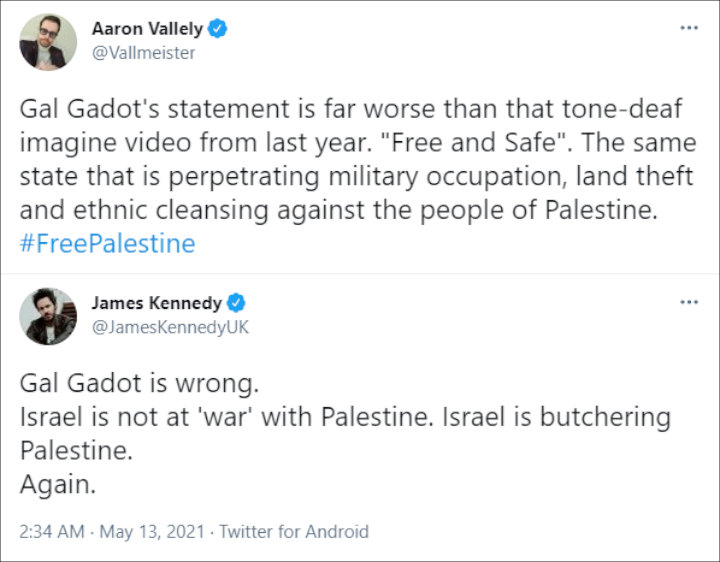 Although Gadot has disabled all comments from both platforms, her tweet has generated over 65,000 quote tweets. The "Justice League" actress herself had taken part in mandatory service with the Israeli Defense Forces at the age of 20. Meanwhile, the latest confrontation between Israelis and Palestinians has caused death of many Palestinians, many of them were children.

Gal Gadot on Standing Up to Joss Whedon: My Sense of Justice Is Very Strong