The 16-year-old was shot to death in Columbus, Ohio less than an hour before former Minneapolis officer Derek Chauvin was found guilty of murdering George Floyd.

AceShowbiz - Beyonce Knowles, Justin Timberlake and The Game are among the stars sharing their outrage following the shooting death of black teen Ma'Khia Bryant at the hands of an Ohio police officer.

The latest cop killing controversy took place less than an hour before the guilty verdicts against former Minneapolis officer Derek Chauvin, who choked George Floyd to death, were read on Tuesday, April 20, prompting activists to renew calls for police reform and accountability, while remembering the tragic 16-year-old.

Beyonce honored Bryant on her website by posting a picture of the teen smiling, and writing underneath, "We mourn the young life of Ma'Khia Bryant."

Rapper The Game took to Twitter and added, "16 year old Ma'Khia Bryant murdered by police in Columbus Ohio. This is beyond sad... There was absolutely no time between celebrating the conviction of Derek Chauvin & having to mourn Ma'Khia Bryant... This is really numbing!!!" 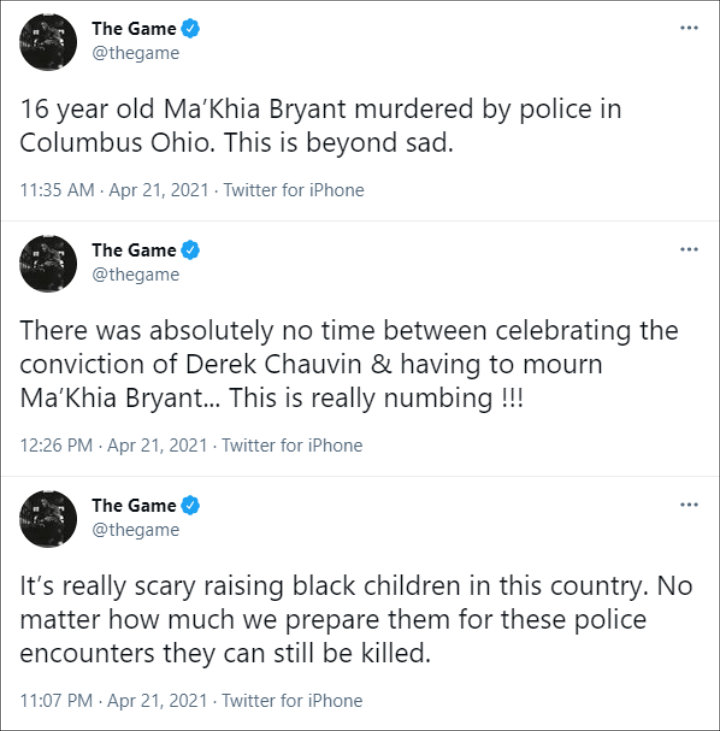 "It's really scary raising black children in this country. No matter how much we prepare them for these police encounters, they can still be killed." And Timberlake added, "Say her name, #MaKhiaBryant."

Bodycam footage released by law enforcement officials shows Bryant wielding a knife at another female, as a police officer can be heard asking both to get down. The teen then appears to charge at a female pinned against a vehicle and is shot four times.

An unidentified man can also be heard in the video, obtained by the Associated Press, stating, "You didn't have to shoot her! She's just a kid, man!"

Bryant was transported to a hospital, where she was pronounced dead.

Meanwhile, Jada Pinkett Smith has posted a photo of the dead teen on Twitter, adding the caption, "Another baby gone. Rest in Love precious #makhiabryant," while Kehlani rages, "ABOLISH THE F**KING POLICE. the same day we 'celebrate' a verdict for another loss that should've never happened, a Black child is murdered."