Having been unraveled to be cast as Kalypso in 'Shazam! Fury of the Gods', the 'Charlie's Angels' star jokes in a social media post that she is 'coming' for Zachary Levi.

The "Charlie's Angels" star will portray Kalypso, the second daughter of the ancient Greek titan Atlas and the sister of Hespera, set to be played by Mirren, in "Shazam! Fury of the Gods".

On Monday, April 12, Liu turned to Instagram Story to poke fun at her casting news. Along with a screenshot of news headline about her joining the sequel, the 52-year-old actress jokingly declared, "I'm coming for you, @zacharylevi!"

Lead actor Zachary Levi has since responded to Liu's Story. Reposting his co-star's post, the 40-year-old actor gushed, "This is gonna be so funnnnnnnnnnnn!!! [dancing emoji]" 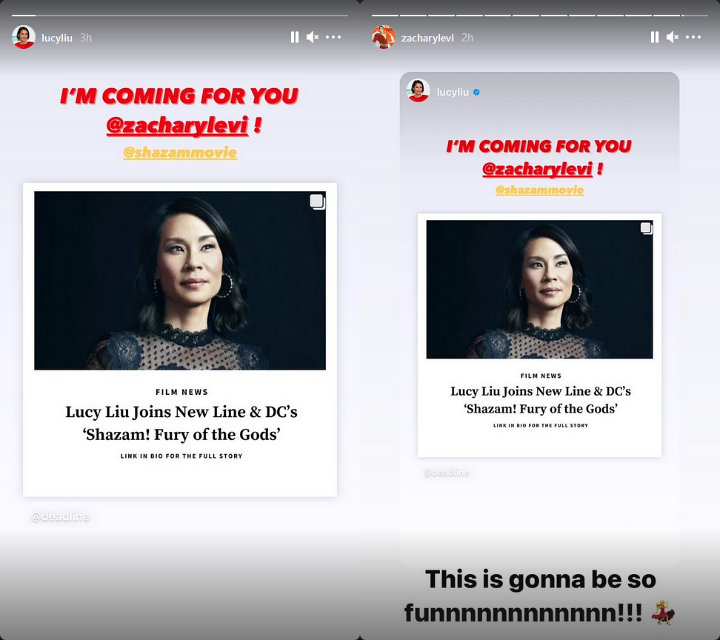 Liu's co-star Mirren has also talked about her involvement in the sequel. "I am privileged to join the team of incredible artists who join together to create the wonder world of Shazam!" she previously told ET. "And it was my stepson's favorite as a kid. We have family photos of him dressed as Shazam from 42 years ago!"

Asher Angel will return as Billy Batson, a teen who transforms into the titular adult superhero, brought to life by Zachary Levi, with original director David F. Sandberg also back behind the camera for the follow-up to the 2019 DC Comics hit.

Also recently added to the cast is newcomer Rachel Zegler, who will star in Steven Spielberg's upcoming "West Side Story" movie adaptation.

'Shazam!' Gets Sequel Treatment With Rehiring of Original Writer and Director