AceShowbiz - Macklemore and Olivia Rodrigo are leading the celebrity outcry after another black man was shot and killed by police officers in Minnesota over the weekend.

Daunte Wright, 20, was pulled over by police officers for a traffic violation on Sunday, April 11, and was shot after returning to his vehicle to seek identification, according to reports.

Wright took off in his car and drove for several blocks before striking another vehicle. He died at the scene, while his girlfriend, who was his passenger, was hospitalized with non-life-threatening injuries.

Daunte's mother, Katie Wright, claims her son was pulled over because he had air fresheners hanging from the rearview mirror.

Minnesota state law prohibits objects suspended between the driver and the windshield that can obstruct vision.

Brooklyn Center Police Chief Tim Gannon described the shooting as "an accidental discharge" at a press conference on Monday as Black Lives Matter protests took place near the scene of Wright's death, which happened during the ongoing trial of Derek Chauvin, the ex-Minneapolis police officer who has been charged with murdering George Floyd on May 25, 2020.

Outraged by the latest police killing, actress and singer Rodrigo shared a graphic that linked Wright's death and Chauvin's ongoing murder trial, while Macklemore raged, "Again. And again. And again. I'm on the verge of tears thinking about his life, his sons life, his parents, his girlfriend [sic]. The ripples of this senseless police killing, AGAIN of an unarmed black man. This is horrific. The word tragedy doesn't do it justice. And it's common practice with our police departments all over the country." 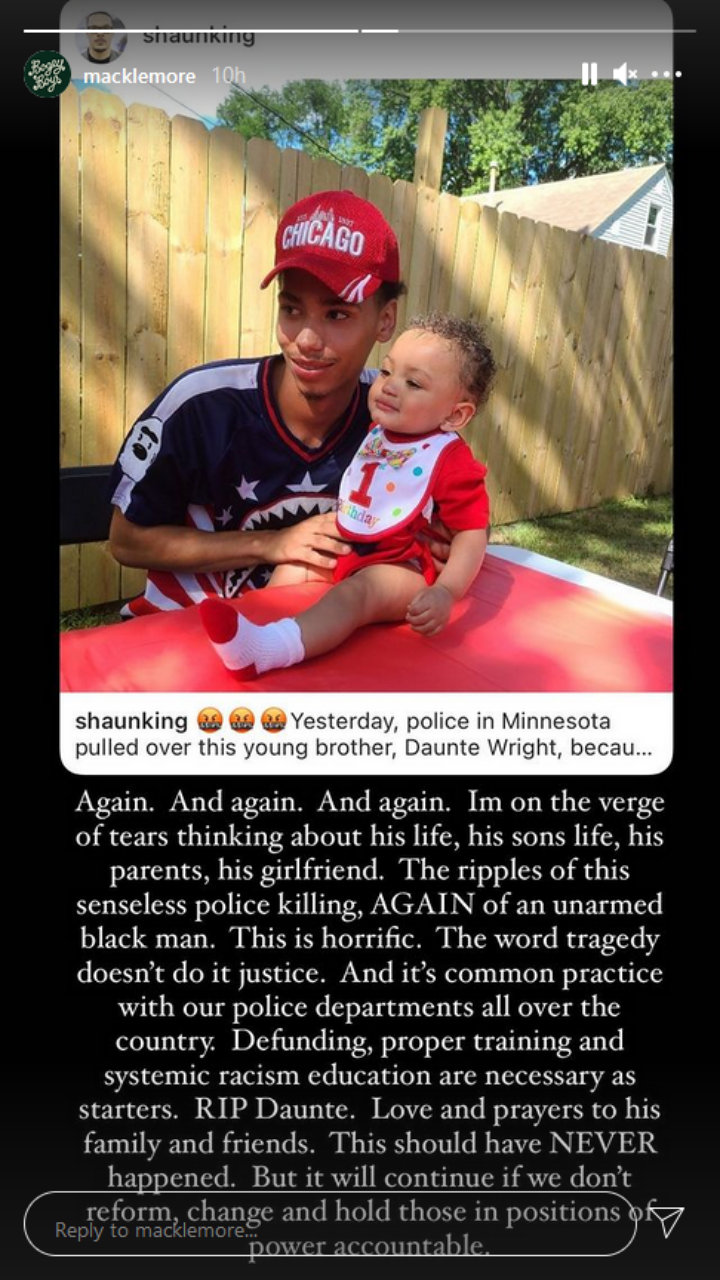 "Defunding, proper training and systemic racism education are necessary as starters. RIP Daunte. Love and prayers to his family and friends. This should have never happened, But it will continue if we don't reform, change and hold those in positions of power accountable."

Ariana Grande and Mandy Moore also shared a list of resources on their Instagram Stories to support those needing bail through the Minnesota Freedom Fund and The Bail Project. 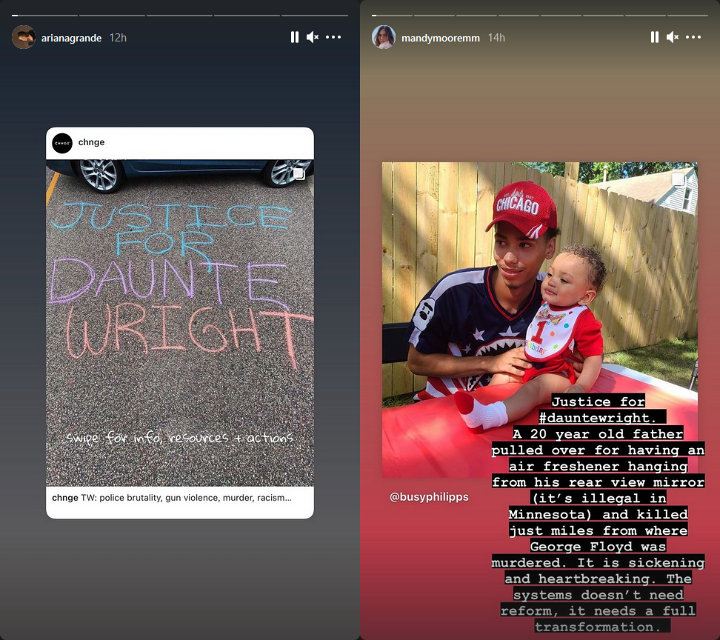 "Justice for #dauntewright," Moore wrote. "A 20 year old father pulled over for having an air freshener hanging from his rear view mirror [it's illegal in Minnesota] and killed just miles from where George Floyd was murdered. It is sickening and heartbreaking. The system doesn't need reform, it needs a full transformation." 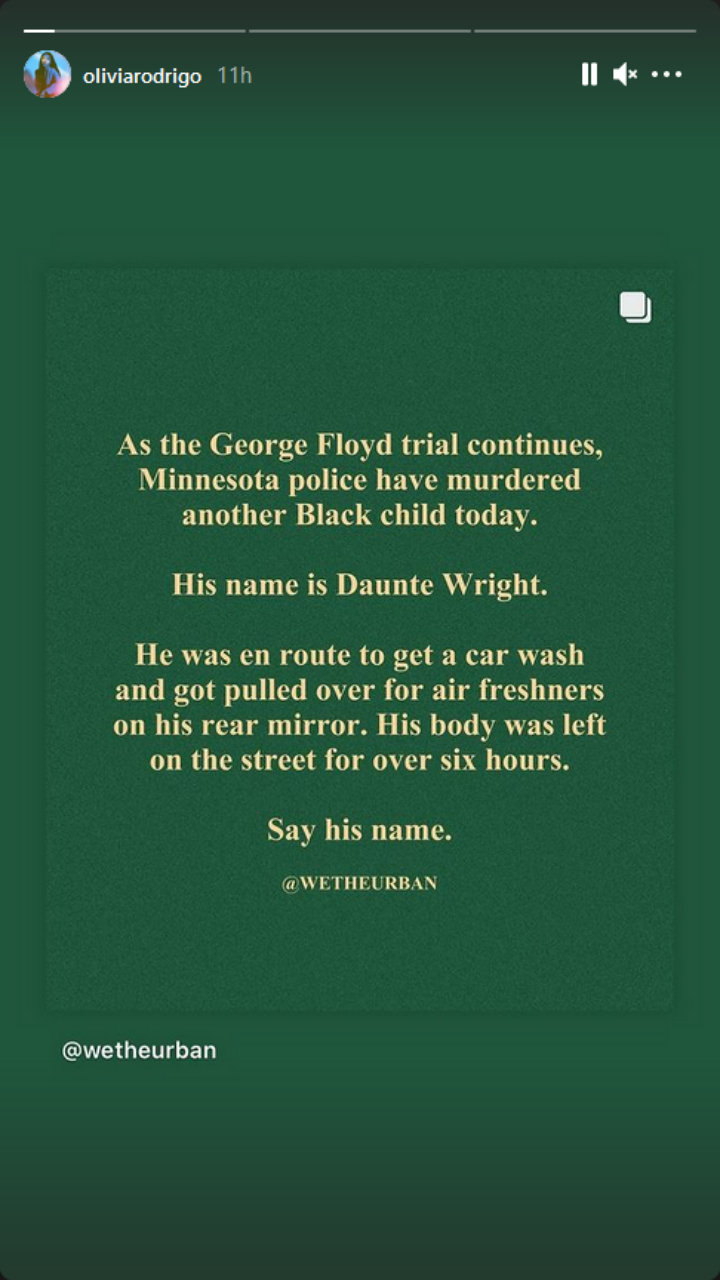 Olivia Rodrigo joined others in protesting the matter. 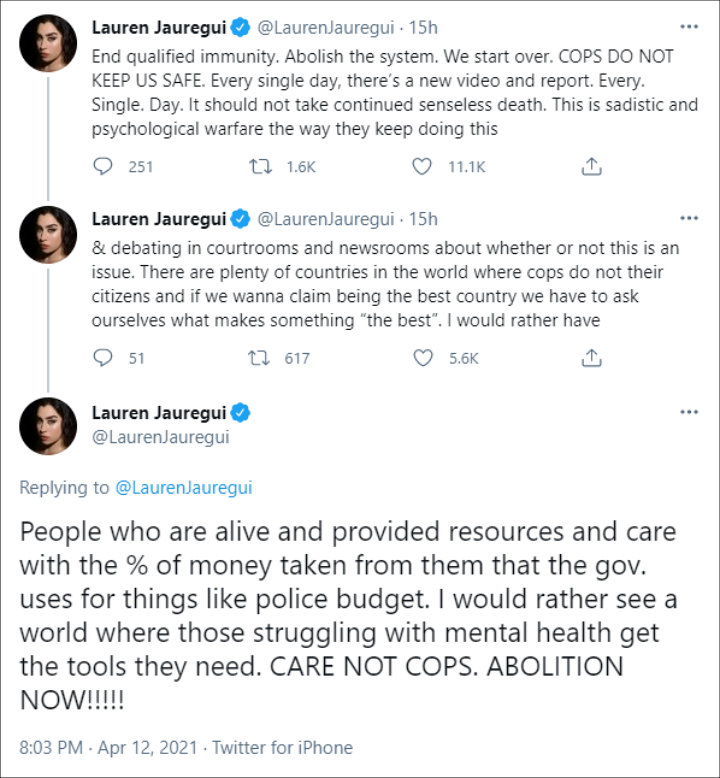 Lauren Jauregui also spoke out against the matter.

The Game and Lauren Jauregui also weighed in on social media, with the former Fifth Harmony singer tweeting, "End qualified immunity. Abolish the system. We start over. COPS DO NOT KEEP US SAFE. Every single day, there's a new video and report. Every. Single. Day. It should not take continued senseless death. This is sadistic and psychological warfare the way they keep doing this & debating in courtrooms and newsrooms about whether or not this is an issue."

Macklemore Credits Rehab When He's 25 for Saving His Life