'The Real Housewives of New Jersey' regular enjoys a night out with her new man, former husband and their four daughters during a trip to Nassau, Bahamas.

AceShowbiz - Teresa Giudice has introduced her new man to her family. When enjoying a dinner with ex-husband Joe Giudice and their four children in Nassau, Bahamas, "The Real Housewives of New Jersey" regular took her new boyfriend Luis "Louie" Ruelas.

Offering a look at Teresa's night out was her daughter Milania. Making use of Instagram Story on Wednesday, March 31, the 15-year-old girl put out a video that saw her mother sitting next to her beau while her father was seated nearby. Her sisters Gia, Gabriella and Audriana also joined them. 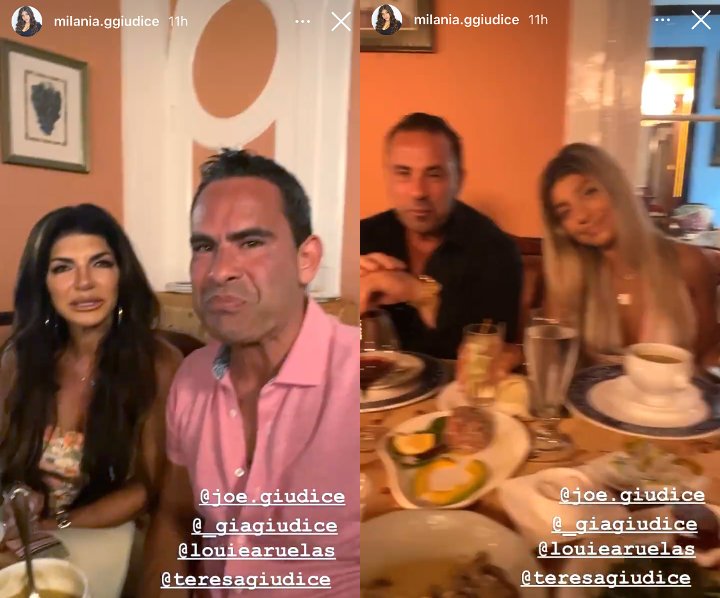 Also giving a glimpse of the outing was her father Joe. Turning to his own Instagram page, he shared a picture of his former wife sending out a kiss for the camera as her new love sat next to her. In the accompaniment of the snap, he simply raved, "Great night out."

Joe then reshared Teresa's post which displayed them posing next to their four daughters. He captioned it, "truly appreciate & hope i will continue to be present in my best friend life. A great person, mom, and confident individual. @teresagiudice @louiearuelas great meeting you and your boy."

Joe and Teresa called it quits after 20 years of marriage and their divorce was finalized in September 2020. In November, the 48-year-old TV personality confirmed her romance with Luis. Joe, meanwhile, went Instagram official with his new girlfriend Daniela Fittipaldi in February 2021.

In late March, Teresa opened up about how Luis wanted to meet Joe in person. When speaking to Andy Cohen on "Watch What Happens Live", she explained, "[Luis] wanted to go to the Bahamas and meet [Joe] - which I thought was the most amazing thing ever."

Southside Accused of Hiring Men to Kill His Father

Teresa Giudice Hints Marriage Is on the Horizon With Beau Luis Ruelas: 'I Feel It'