The Australian hunk is seen being joined by co-stars Natalie Portman, Tessa Thompson and Jeff Goldblum, as well as director Taika Waititi in a private suite when watching the match in Sydney.

AceShowbiz - Chris Hemsworth does not limit his interaction with co-stars to filming set. On Friday, March 26, the leading man of "Thor" was spotted enjoying a fun gathering with the cast and crew of the Marvel superhero movie at rugby game in Sydney, Australia.

Accompanied by wife Elsa Pataky, the 37-year-old actor was caught on camera at Stadium Australia. He was joined by Tessa Thompson, Jeff Goldblum and "Thor: Love and Thunder" director Taika Waititi. Natalie Portman and her husband Benjamin Millepied were also seen in the private suite.

The A-listers were captured enthusiastically cheering the players from their seat. It was the game between the South Sydney Rabbitohs and the Sydney Roosters. Joining the "Thor" club were "Unhinged" star Russell Crowe and "Now You See Me" actress Isla Fisher. The big names were sharing some quality time in the private suite. 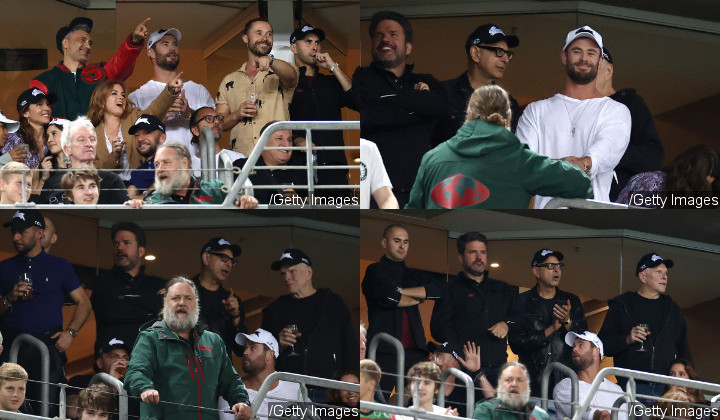 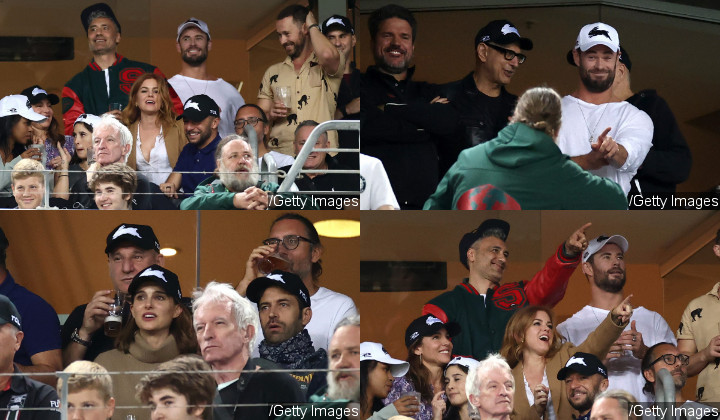 With Jeff being seen mingling with the crowd, speculations were rife that he is likely to be reprising his role as the Grandmaster in "Thor: Love and Thunder". The 68-year-old actor has tackled the part in "Guardians of the Galaxy Vol. 2" and "Thor: Ragnarok", but is not yet confirmed to be making a comeback in the fourth "Thor" film.

"Thor: Love and Thunder" is currently in production in Australia, and is scheduled to be released on May 6, 2022 in the United States. Chris returns as the titular God of Thunder, while Natalie slips back into her part as Jane Foster, who will turn into the Mighty Thor. Tessa is also back as Valkyrie.

In early March, Lena Headey was rumored to be joining the cast ensemble. The "Terminator: The Sarah Connor Chronicles" star was alleged to be starring opposite Tessa as her love interest. Should the rumor be true, it would place her as Marvel Studios' first LGBTQ superhero.