Reacting to the March 16 shootings that left eight people dead, the 'To All the Boys I've Loved Before' star also made a wake-up plea to fellow Americans for the 'deeply scared' Asian friends and family.

AceShowbiz - Lana Condor's longtime boyfriend is deeply troubled by the deadly shootings that took place in multiple Atlanta massage parlors on Tuesday evening, March 16. Through a social media post, the "To All the Boys I've Loved Before" star revealed that Anthony De La Torre is worried about her safety in the wake of the violence.

On Wednesday, March 17, the 23-year-old actress shared with her Twitter followers, "Anthony told me last night he is afraid for me to go to the nail salon." She went on to express her own thought on his fear by writing in the same post, "This is not a world we should live in." She followed it up by tweeting the hashtag of "Stop Asian Hate". 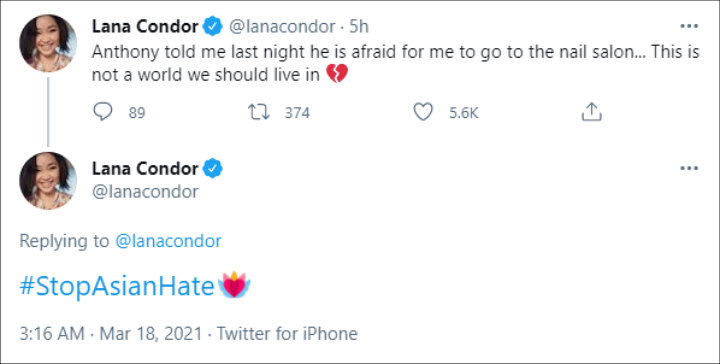 Hours before making the revelation, Lana made an important plea to fellow Americans in response to the deadly shootings. "Wake up... your Asian friends and family are deeply scared, horrified, sick to their stomachs and wildly angry," the actress who was adopted from an orphanage in Vietnam emotionally tweeted.

"Please please please check in on us, please please please stand with us. Please. Your Asian friend needs you, even if they aren't publicly grieving on social media," she continued pleading in the same tweet. Touched by the support she received thereafter, she then tweeted, "You guys don't know how much your kind words mean to me right now. I love you so much wow." 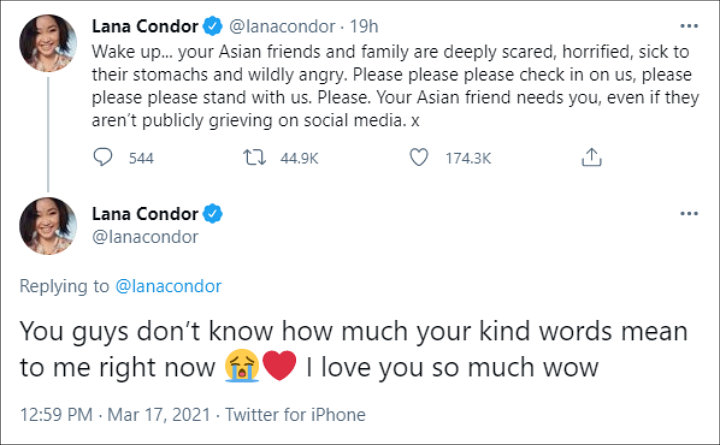 The Tuesday spa shootings left eight people dead. Most of them were reported to be women of Asian descent. On Wednesday, South Korea's Foreign Ministry said in statement that at least four of the victims were of Korean descent. The deadly shootings came as anti-Asian hate crime grew exponentially in 16 of America's largest cities following the spread of COVID-19.

After a manhunt, a 21-year-old man identified as Robert Aaron Long was arrested in southwest Georgia, and charged with eight counts of murder and one count of aggravated assault. He was suspected of being the lone gunman at Youngs Asian Massage Parlor in Cherokee County, the Gold Spa in northeast Atlanta and the Aromatherapy Spa located right across the street of the Gold Spa.

Former President Barack Obama has since issued a statement about the mass killings. "Although the shooter's motive is not yet clear, the identity of the victims underscores an alarming rise in anti-Asian violence that must end," he tweeted. "Michelle and I pray for the victims, their families, everyone grieving these needless and devastating killings - and we urge meaningful action that will save lives." 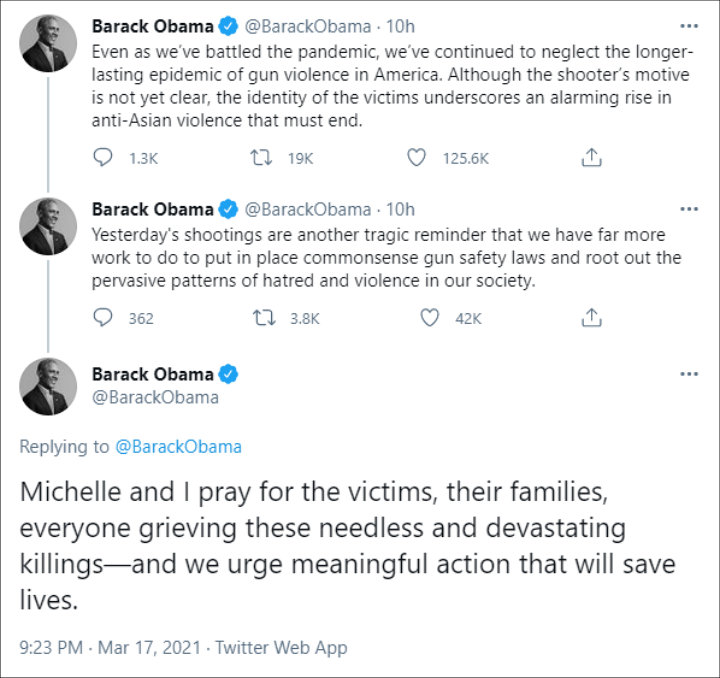 Many Hollywood stars have also voiced their distressed over the violence. Olivia Munn, Daniel Dae Kim, Mindy Kaling and "The Farewell" director Lulu Wang were among those turning to social media to condemn the attacks against the Asian American community.

Lana Condor, Noah Centineo to Be Part of Weekly Series About Mental Health Amid Coronavirus Crisis