The 'Don't Go Breaking My Heart' singer calls out the Catholic Church after it issues a statement ruling out the blessing on same-sex unions because they are 'sin.'

AceShowbiz - Elton John has spoken up on the Vatican's stance on gay marriages. The British rocker blasted the Catholic Church after it declared that it won't bless same-sex unions because they are "sin," despite Pope Francis' previous statement to embrace gay couples.

Responding to the Vatican's statement, Elton called out the church's "hypocrisy" for allegedly profiting from his 2019 biopic "Rocketman" yet ruling out same-sex marriages. "How can the Vatican refuse to bless gay marriages because they 'are sin', yet happily make a profit from investing millions in 'Rocketman' - a film which celebrates my finding happiness from my marriage to David?? #hypocrisy," he tweeted on Monday, March 15, along with a screenshot of a December 2019 story from The Daily Beast that detailed a report about The Vatican's finances. 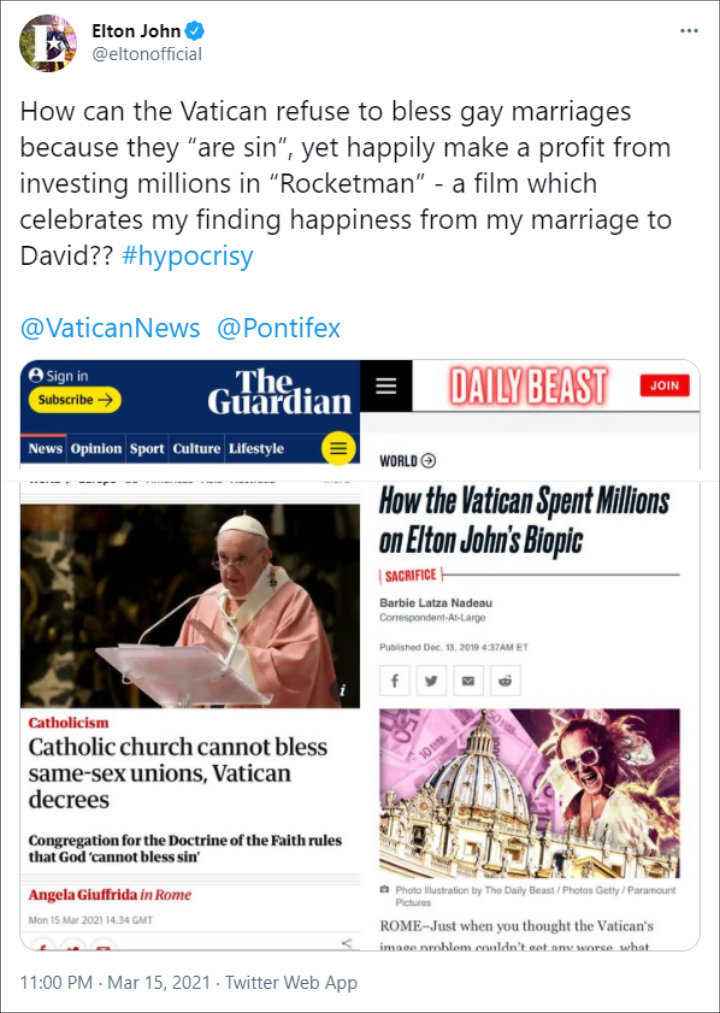 Elton John called out the Vatican for refusing to bless same-sex marriage.

The Vatican's orthodoxy office, the Congregation for the Doctrine of the Faith, issued a two-page decree that was approved by Pope Francis on Monday in response to a question about whether Catholic clergy have the authority to bless gay unions. The response made a point to say that the Catholic Church still welcomes and blesses gay people but cannot ultimately see their union as part of God's plan.

"The presence in such relationships of positive elements, which are in themselves to be valued and appreciated, cannot justify these relationships and render them legitimate objects of an ecclesial blessing, since the positive elements exist within the context of a union not ordered to the Creator’s plan," the response said. It added that God "does not and cannot bless sin: He blesses sinful man, so that he may recognize that he is part of his plan of love and allow himself to be changed by him."

Francis DeBernardo, executive director of New Ways Ministry, which advocates for greater acceptance of gays in the church, predicted the Vatican position would be ignored, including by some Catholic clergy. "Catholic people recognize the holiness of the love between committed same-sex couples and recognize this love as divinely inspired and divinely supported and thus meets the standard to be blessed," he said in a statement.

Pope Francis previously made comments that endorsed providing gay couples with legal protections in same-sex unions, but that was in reference to the civil sphere, not within the church. The former archbishop of Buenos Aires said in a 2019 interview with a Mexican broadcaster, Televisa, "Homosexual people have the right to be in a family. They are children of God."

"You can't kick someone out of a family, nor make their life miserable for this. What we have to have is a civil union law; that way they are legally covered," the Pope added. His comments were censored by the Vatican until they appeared in a documentary in 2020.