Prior to this, the TV father of Meghan shared his opinion on the headline-making interview between the Duke and Duchess of Sussex with host Oprah Winfrey, calling it 'quite insensitive and offensive' amid COVID-19 pandemic.

AceShowbiz - Wendell Pierce apparently has a change of heart when it comes to his "Suits" co-star Meghan Markle's tell-all interview over the weekend. After dubbing the sit-down "insignificant," Wendell has clarified his comments in a series of tweets on Wednesday, March 10.

"I just discovered my words are being used as an attack. Well done British Press," Wendell, who played Robert Zane on "Suits", wrote on the blue bird app. "Clarity: The British monarchy is archaic in my American eyes. If slavery, colonialism and apartheid didn’t educate you that they are racist, you failed history."

The TV father of Meghan went on to say, "I was fortunate to tell Meghan personally I wish her all the best. Predicting this hellacious maelstrom I also told her she would always have a friend in me. Because I had no interest in the interview doesn’t change that."

He also denied being "insensitive to suicide," referring to the Duchess' revelations that she was on the brink of suicide due to endless attack from British media. "Unfortunately my family has suffered the pain of losing someone to suicide. I never was interviewed by the Daily Mail and their story manipulated my words in a radio interview. As I told Meghan, I support her and wish her all the best." 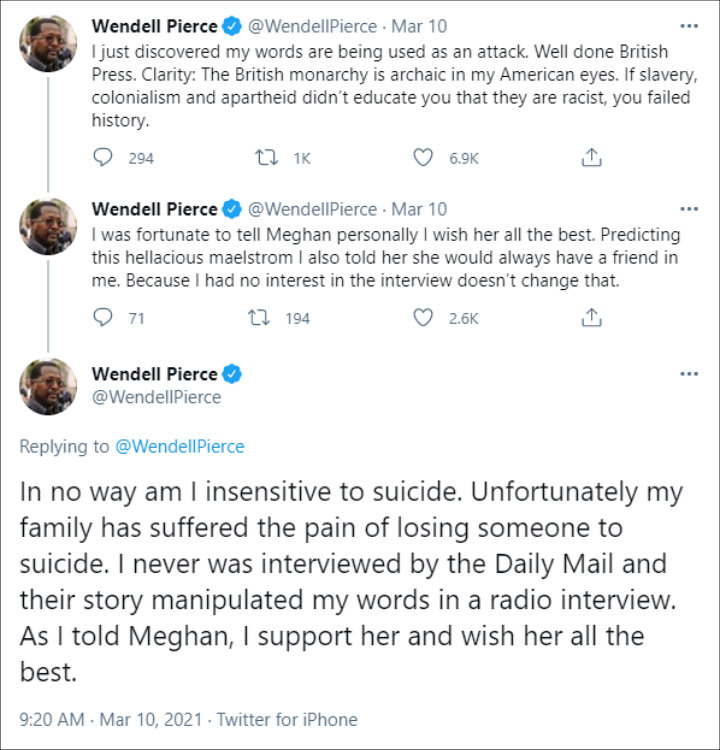 Prior to this, the 57-year-old shared his opinion on the headline-making interview between the Duke and Duchess of Sussex with host Oprah Winfrey. "Today 3,000 people are going to die in America from Covid. A couple of hundred people are going to die, even this hour, in the U.K.," he first stated in the Tuesday episode of Britain's LBC radio station.

"[It's] full of sound and fury, signifying nothing," Wendell said of the interview, quoting Shakespeare's "MacBeth". Directing his criticism Meghan, Prince Harry, Oprah, CBS, ITV and the Palace, the James Greer of "Jack Ryan" further argued, "It was quite insensitive and offensive that we are all complicit in this sort of palace … gossip in the midst of so much death." He added that the royals should not get involved "in this sort of conversation" and "focus on the throes of death that we're in" instead.