Words are the 'Back in Blood' hitmaker's brother Tee Da P, who had also released his own rap records, has lost his battle with cancer after initial reports said he died of gunshot wounds.

AceShowbiz - Pooh Shiesty may have one less supporter in his rising music career. The 21-year-old, who has been enjoying the success of his first debut commercial mixtape, is reportedly mourning the loss of his brother Tee Da P.

Tee Da P, who had also released his own rap records, has recently passed away from brain cancer after being hospitalized for months. Earlier reports said Tee Da P was killed in a shooting, but Say Cheese TV and No Jumper claimed that information is false.

"CORRECTION! Blogs posted the wrong information," SayCheese posted on Instagram on Sunday, February 28. "We just got off the phone with @tee_da_p's father. He confirmed He passed away from brain cancer. He was not shot. RIP!"

Sources additionally clarified the shooting rumors to Urban Islands. "The shot and killed stories are false and only people close to Pooh knew his brother had been sick for a while, but he may address this sometime in the future now we should all just let him mourn and real Shiesty fans will show their support," the sources said.

Pooh Shiesty has not spoken up on the reports of his brother's passing. The "Back In Blood" hitmaker was supposed to perform this weekend in Savannah, Georgia, but the show was canceled so he could spend time with his family.

Pooh Shiesty addressed his canceled show on Instagram Story after it was rumored that he was scared of rival rapper Quando Rondo. "ABOUT THE SHOWS IN COLUMBIA SC AND SAVANNAH CA WE HAD A FAMILY EMERGENCY SO WE COULDN'T MAKE IT LAST NITE BUT WE COT Y'ALL IT WASN'T ON THE PROMOTER WE WILL KEEP YOU UPDATED ON A NEW DATE," he explained, without detailing what the "family emergency" was. 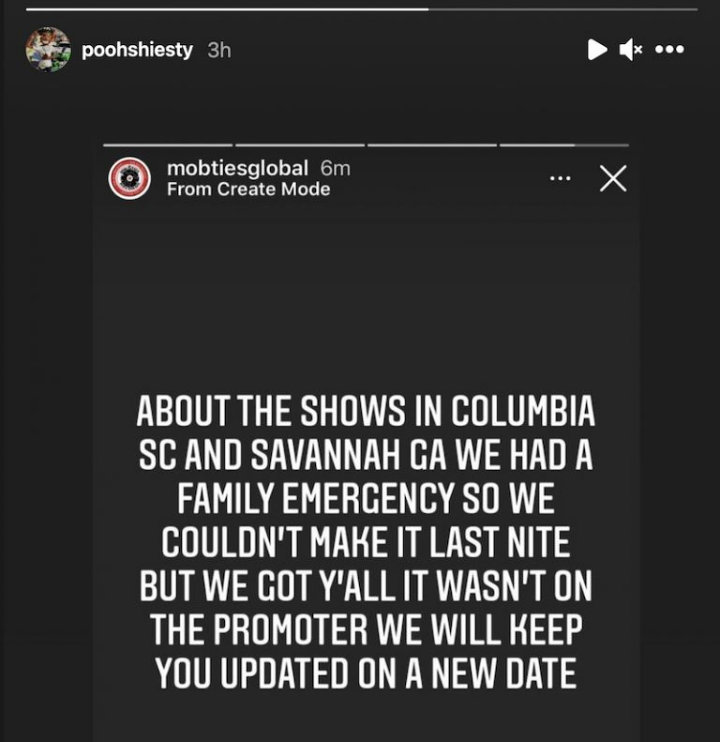 As for Pooh Shiesty, he has been making his name in the hip-hop music industry after the release of "Shiesty Season" on February 5. The mixtape peaked at No. 4 on the U.S. Billboard Hot 200 chart.

Artist of the Week: Pooh Shiesty