The 'This Is Us' star is publicly calling out editors at an unidentified publication after they scrapped plans to interview her due to her decision not to open up further about Ryan Adams relationship.

AceShowbiz - Mandy Moore has taken aim at the press after she was snubbed for an interview because she apparently refused to revisit her allegedly abusive marriage to Ryan Adams.

The "This Is Us" star went public with her claims against Adams in a damning expose published in The New York Times in early 2019, when a number of women, including Moore and the rocker's ex-fiancee Megan Butterworth, called him out on sexual misconduct and manipulative behavior.

The singer/actress claimed the musician, to whom she was married from 2009 to 2016, was psychologically abusive during their relationship and his controlling behavior reportedly hurt her music career - accusations Adams has denied.

Since speaking out, Moore has been able to let go of her painful past and enjoy the true happiness she has found with her second husband Taylor Goldsmith, with the couple now expecting its first child imminently.

However, Moore was left fuming after editors at an unidentified publication scrapped plans to interview the star unless she opened up further about "a certain subject" - indicating it revolved around her former marriage - even though the article was supposed to profile her "entire life and career".

In a lengthy Instagram Story post on Tuesday, February 16, Moore admitted she had "hesitated" in sharing the news online, but knew she had to address the snub after waking up with her blood "still boiling".

Alongside a shot of the message she had received, informing her the interview could no longer go ahead, she wrote, "When they (the publication) were told that I had spoken plenty about a certain subject in my life and would have no further comment (truly there are countless interviews they could pull from, that story is over and there's nothing more to say.), this was the response we got back (sic)."

"Any comment I make about said experience becomes clickbait and gives them (abuser) the energy and time they seek and have already stolen from too many for too long," Moore added.

"I have been in this business for over 2 decades with plenty to chat about... but the message this sends is insulting and so out of touch with the cultural discussion around abusive relationships, directly linking someone's value back to their abuser."

"The refusal to interview someone unless they agree to relive that trauma publicly? No thank you," she declared, adding, "I am about to give birth any second and I'm not afraid to draw healthy boundaries. Bye." 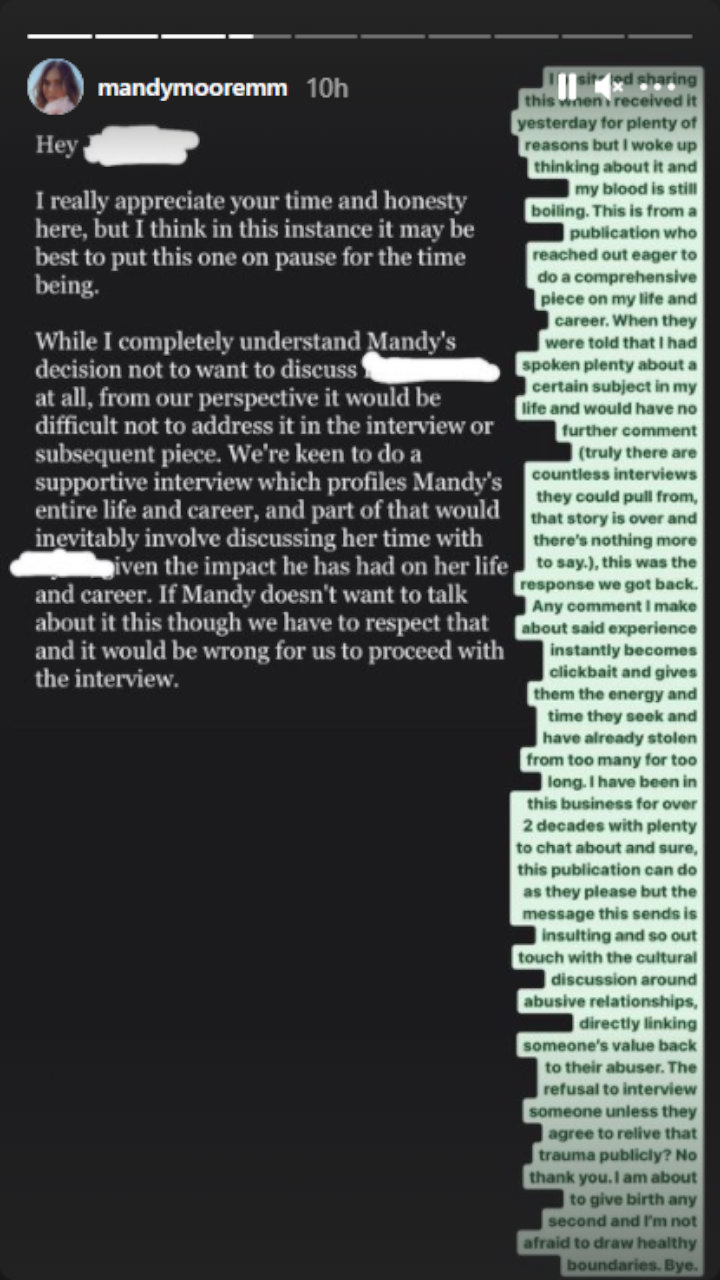 Mandy Moore blasted an unidentified publication for backing out of planned interview.

Moore previously insisted she had no regrets about sharing her personal experience with Adams, who issued a public apology to all the people he had hurt with his alleged behavior last summer (2020), but she subsequently made it clear she was "so done" talking about the troubled singer/songwriter, and wanted to start a new chapter in her life.

Moore's Instagram post comes a month after Adams was cleared by FBI agents after he was accused of engaging in inappropriate correspondence with underage girls. However, no evidence was found to support the claims, and the case was closed.

Mandy Moore Recalls Giving Birth to Her First Child: 'I Was on My Own'