NFL Star Vincent Jackson's Death at 38 Under Investigation by Cops

The former Tampa Bay Buccaneers player was found dead in a hotel room at the Homewood Suites in Brandon, Florida on Monday, five days after his family reported him missing.

AceShowbiz - The Bucs are in mourning, just a little over a week after being overjoyed by their Super Bowl LV win. Former NFL player Vincent Jackson, who was one of their own, has passed away at 38 years old.

Jackson was found dead in a Tampa-area hotel room on Monday morning, February 15 at approximately 11:30 A.M. The Hillsborough County Sheriff's Office said in a statement released on Monday that the former Tampa Bay Buccaneers star had been staying at the Homewood Suites in Brandon, Florida since January 11.

Jackson's passing came five days after his family filed a missing person report on February 10. After authorities located Jackson at the Homewood Suites, spoke with him and assessed his well-being, they canceled the missing persons case.

A cause of death has not been determined, but police said there were no signs of trauma. His passing is currently under investigation by cops.

"My heart aches for the many loved ones Vincent Jackson leaves behind, from his wife and children to the Buccaneers nation that adored him," Sheriff Chad Chronister said in a statement. "Mr. Jackson was a devoted man who put his family and community above everything else. Football aside, he touched countless lives through his Jackson In Action 83 Foundation."

He added, "We shared a passion for supporting military families, and three years ago, Jackson was even made an honorary deputy by the Hillsborough County Sheriff's Office to recognize his dedication to the community. He will be sorely missed by not only football fans across the country, but also the people here in Hillsborough County who reaped the benefits of his generous contributions."

Jackson's former team the Buccaneers also released a statement on his sudden death. "We are shocked and saddened to hear the terrible news regarding the loss of Vincent Jackson," Buccaneers co-chairman Bryan Glazer said in the statement posted on the team's official Twitter page.

"During his five seasons with our franchise, Vincent was a consummate professional, who took a great deal of pride in his performance on and off the football field," he remembered the former wide receiver. "Vincent was a dedicated father, husband, businessman and philanthropist, who made a deep impact on our community through his unyielding advocacy for military families, supported by the Jackson in Action 83 Foundation."

"He was a three-time Pro Bowl selection for his accomplishments on the field, but his greatest achievements as a Buccaneer were the four consecutive nominations he earned as our Walter Payton Man of the Year," the team continued to pay tribute, before sending "our deepest condolences" to "his wife, Lindsey, and the entire Jackson family." 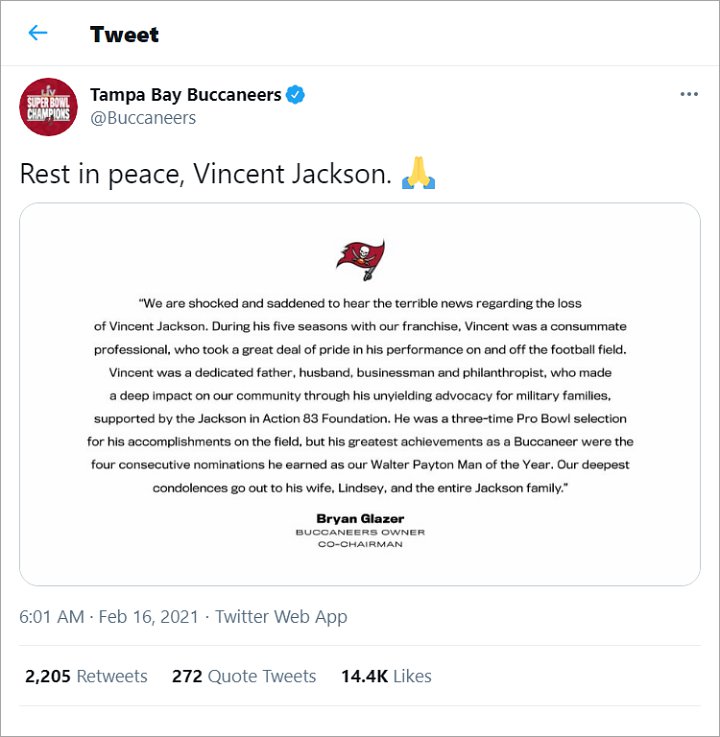 Jackson's former teammate Mike Evans also mourned the death, posting on his own Twitter page, "V Jax thank you for everything I love you big bro. Praying for your family Rest in Paradise." 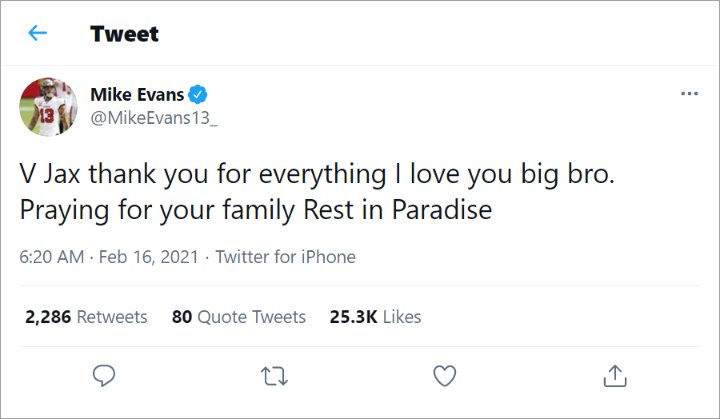 Mike Evans mourned the death of his former teammate.

Jackson was drafted to the San Diego Chargers in 2005 and played there for six seasons, before joining the Buccaneers in 2012. He retired from the NFL in 2016. He shared three children, Carter, Amaya and Dominick, with his wife Lindsey VanDeweghe, whom he wed in July 2011.