The 'Always On Time' hitmaker, who was infamously involved in the disastrous Fyre Festival event in 2017, has showed off how he positively used his downtime during the COVID-19 shutdown.

AceShowbiz - Rapper Ja Rule has used his downtime during the COVID-19 shutdown to become an online graduate of the Harvard Business School.

The "Always On Time" hitmaker, who was infamously involved in the disastrous Fyre Festival event in 2017, has showed off his certificate for his studies, which included a specialisation in "Entrepreneurship Skills", via social media.

Alongside a Twitter snap of the accolade, he boasted about the accomplishment, "I ain't the sharpest knife in the drawer buuuuut... (sic)". 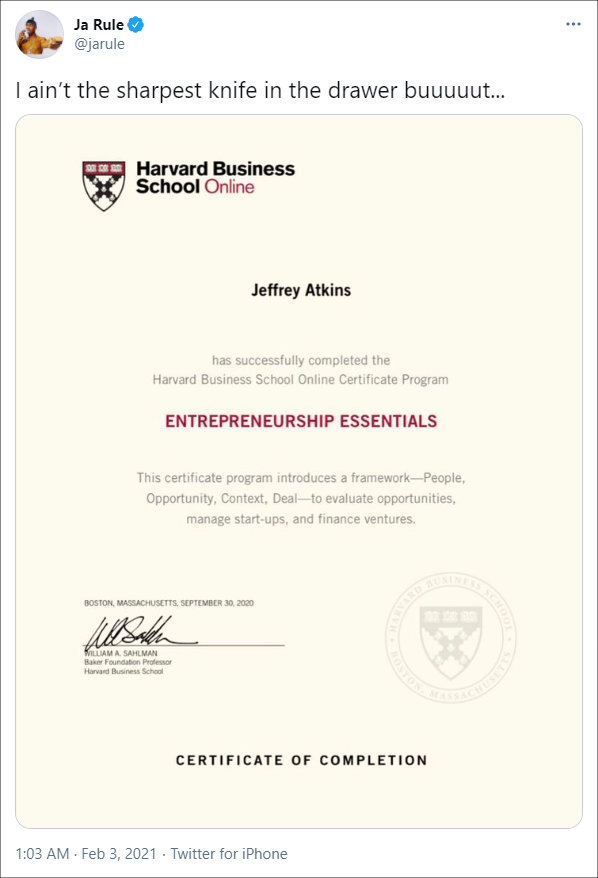 According to the certificate, the programme introduced students to "a framework - People, Opportunity, Context, Deal - to evaluate opportunities, manage start-ups, and finance ventures".

The lessons learned should come in handy for Ja Rule, real name Jeffrey Atkins, as he becomes more involved in a variety of tech and start-up projects, including a new celebrity booking app called Iconn.

Ja previously [u=/news/view/00166025.html]landed in hot water for welcoming former president Donald Trump, who was banned from several social media, on his app, prompting him to clarify his stance. "WTF IS WRONG WITH YALL??? I CAN'T STOP ANYONE FROM BEING ON MY APP." He added, "THAT'S DISCRIMINATION... JESUS DO I REALLY HAVE TO EXPLAIN THIS."

"I HATE Trump but I can't stop ppl from being on my platform cause I don't like them... That's DISCRIMINATION," Ja added in an Instagram comment. "I would get sued... much love tho. AND FOR THE I DON'T WANT TRUMP ON ICONN NOR DOES HE NEED TO USE IT HE'S RICH. ICONN IS FOR CONTENT CREATORS TO MAKE MONEY GET TIPS, CHARGE FOR LIVES, GET BOOKED FOR PRIVATE LIVES ETC."