While James thanks the show and its network ABC for having his back while he 'legally supported out President,' creator Mike Fleiss blasts him as an 'idiot jerkoff' for joining the protest.

AceShowbiz - Ben Higgins has challenged James McCoy Taylor's statement about his attendance at Donald Trump's rally. Upon hearing James' claims that he got support from "The Bachelorette" and its network ABC for joining the January 6 protest, the season 20 star of "The Bachelor" accused his fellow Bachelor Nation member of lying.

Ben offered his two cents when speaking to Insider. "It was a dark day in American history and he was there for it and it's still being promoted through him. I can't say he and I have anything in common," he said of James. "However, he is representing 'The Bachelor' and I think he went as far as saying that 'The Bachelor' supported his efforts to do this - that is wrong! And he's lying."

"That didn't happen. Nobody supported him in that. He's lying and lying is not an OK thing to do," the ex-fiance of Lauren Bushnell went on stressing. "I don't know why he's doing it."

Also debunking James' claims was a source close to ABC. The so-called insider said it was "unequivocally false" that the network and the show had supported him for attending the pro-Trump protest. The source added, "He has not been associated with the franchise for years."

"The Bachelor" creator Mike Fleiss additionally blasted James on Twitter. "Whoever that former cast member/idiot jerkoff is that went to Trump's treasonous rally, got a message for ya... You are officially exiled from #BachelorNation !!!" he argued, before scolding James in another post, "Thanks all for letting me know. @JamesTaylor_com shame on you." 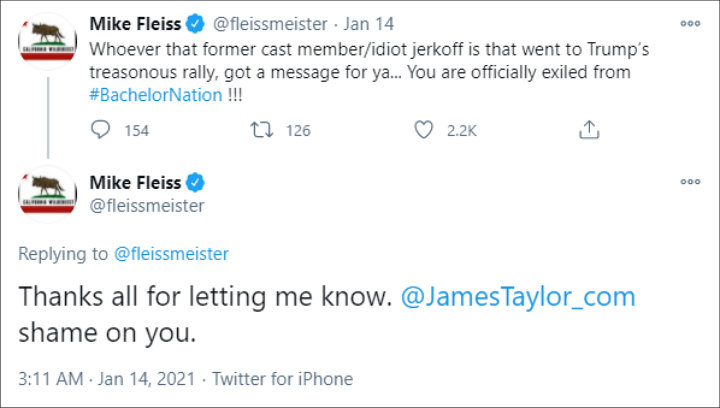 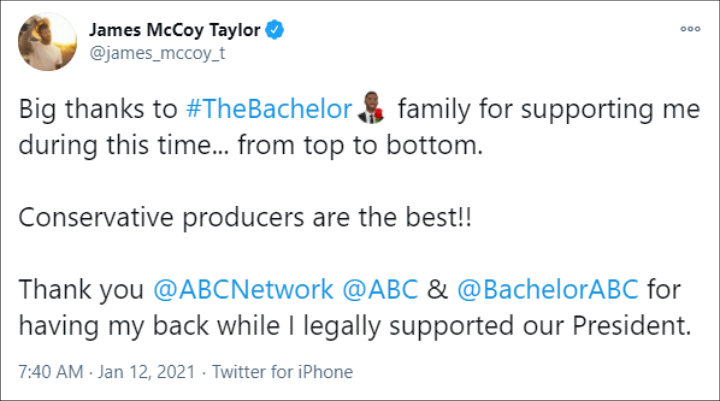 James McCoy Taylor claimed he got support from 'The Bachelor' and ABC network in attending the Capitol protest.

The condemnations came after James, who appeared on JoJo Fletcher's season in 2016, thanked the show and its network ABC for having his back while taking a part in the Capitol protest. "Big thanks to #TheBachelor family for supporting me during this time... from top to bottom. Conservative producers are the best!! Thank you @ABCNetwork @ABC & @BachelorABC for having my back while I legally supported our President," he tweeted on January 12.

Ben Higgins Gushes Over New GF Jessica Clarke: 'She Is Someone Special'