Months after welcoming her first child with boyfriend Zayn Malik, the fashion model spills when she learned about her being pregnant and about her pregnancy cravings.

AceShowbiz - Gigi Hadid discovered she was pregnant the day before she walked the runway at a Tom Ford show in February, 2020.

The 25-year-old became a first-time mum in September and now reveals the moment she found out she was expecting boyfriend Zayn Malik's kid.

Asked by a fan on Twitter if she knew she was pregnant when she walked for designer Simon Porte Jacquemus in January, 2020, the model replied, "Yes, I found out the day before the Tom Ford show."

"I was so nauseous backstage but I learned I could kinda control it if I continuously ate, so my mom would pack me snacks before each show. Bless." 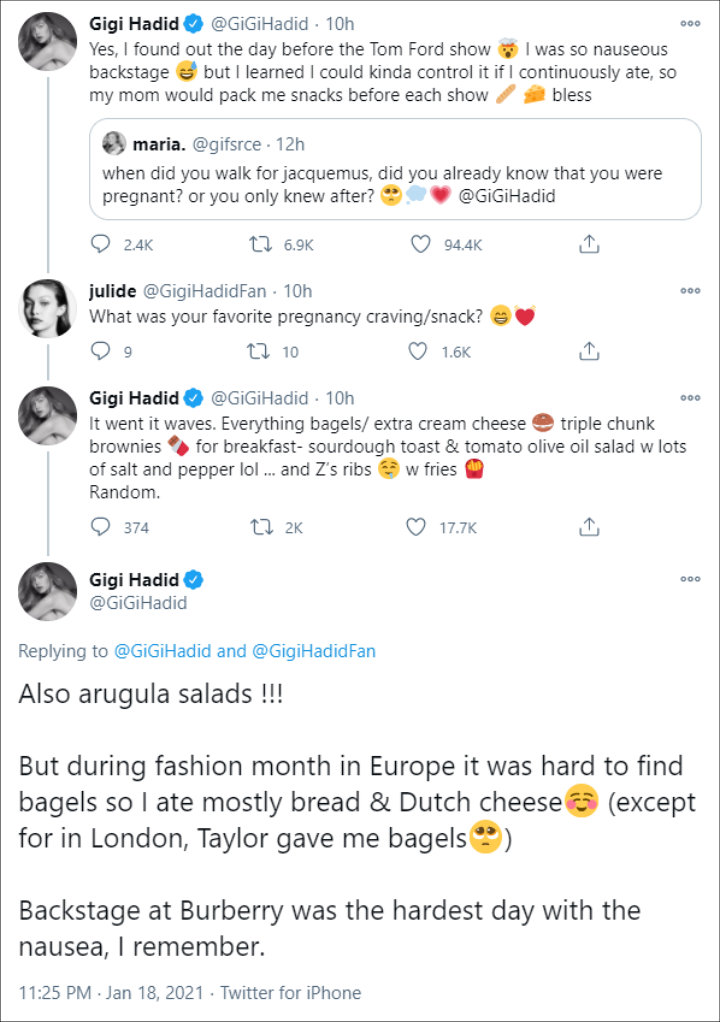 Gigi Hadid answered fans' questions about her pregnancy and cravings.

And Gigi reveals she really struggled as a mum-to-be during fashion month in Europe, where it was "hard to find bagels", adding, "Backstage at Burberry was the hardest day with the nausea, I remember."

Gigi and Zayn have been keeping their daughter's privacy. However, earlier this month fans accidentally got the first look at her baby through Gigi's mom Yolanda Hadid's Instagram post featuring her holding the baby, without knowing that there was a mirror in the room that seemed to catch the infant's reflection.

After being notified by some of her followers, "The Real Housewives of Beverly Hills" alum quickly deleted the post and replaced it with a cropped version of the photo.