The 'Pretty Girl Rock' singer has landed in hot water as she cited freedom of speech to criticize Twitter for blocking President Donald Trump's account after the violent protest at Capitol Hill.

AceShowbiz - Keri Hilson came under fire as she disagreed with Twitter for suspending President Donald Trump's account following Capitol Hill riot recently. The "Pretty Girl Rock" singer cited freedom of speech in a post on Instagram Story as she criticized Twitter for blocking the MAGA leader.

"This may be funny. But it is a little dangerous too. Take Trump out of it for a moment…a democracy must include freedom of speech," she weighed in on the removal of the POTUS from the social media. "Imagine other leaders of popular figures not being able to voice their opinion if it opposes the majority of world leaders…"

She continued, "Our freedom of speech being taken from us, slowly but surely (censorship). If the leader of the 'free world' can be removed. Imagine that same right of civilians. Imagine believing every time you read 'false information detected' and propaganda, deceptive reports, and flat out lies being the only thing we see." 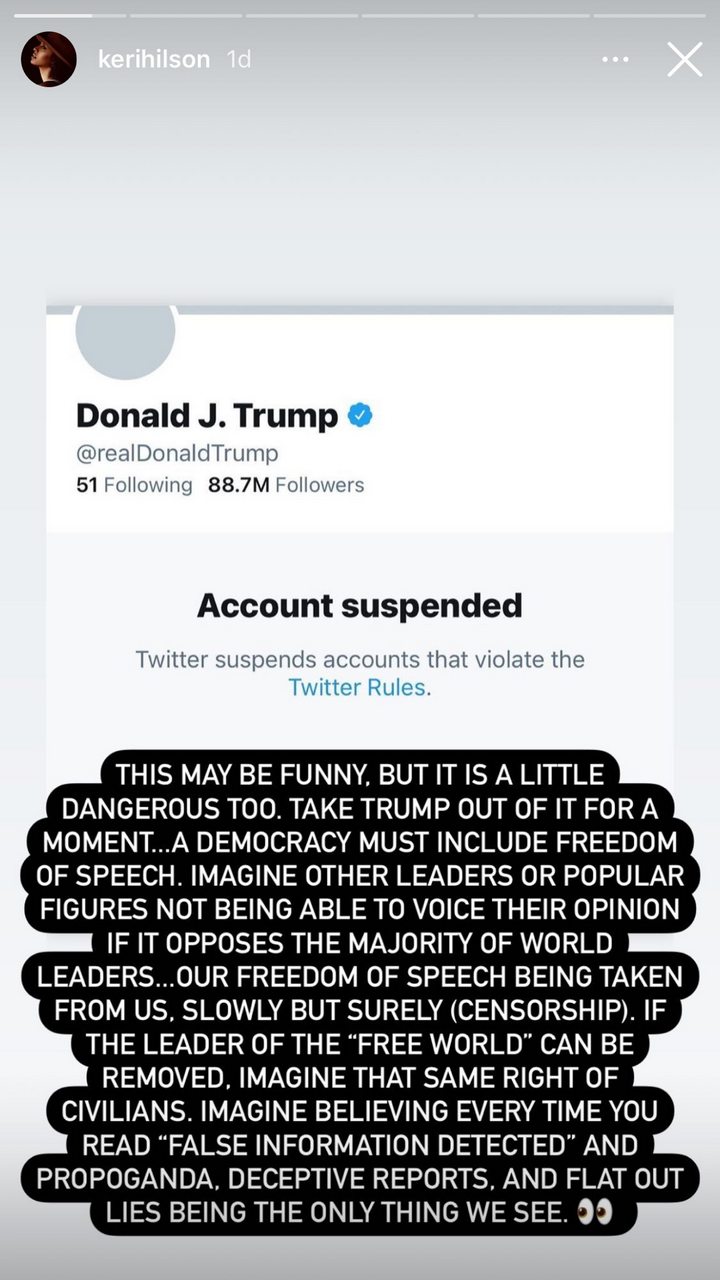 As she faced backlash online, she left a comment on a gossip blog to explain herself. She insisted she never defended the reality TV star-turned-Republican politician, "For the record, I don't give a f*ck about Trump."

"My post wasn't as much about him as some are purposely trying to make it," she explained. "If you can comprehend, I said, 'Take Trump out of it,' so don't come at me like I'm caping for Trump. I recognize why he was removed. It's the wider view that's scary to me."

She went on, "Here's some context: It brought on a broader fear because I have several influential friends who are constantly censored, silenced, & shadow-banned for anything they post - even personal opinions - that opposes the gov't, elite agenda, or cooperative platforms. And they're NOT inciting violence. That's where I'm coming from…"

While many dragged Keri for her unpopular opinions, she at least got support from fellow star Waka Flocka Flame. As the gossip blog asked their followers about their thoughts on the matter, the rapper seemingly sided with Keri as he wrote, "Somebody smart."

Keri Hilson Is Against COVID-19 Vaccine: Don't Take That