'The Real Housewives of Beverly Hills' star expresses her support for the wife of Alec Baldwin after Billy Baldwin and wife Chynna Phillips weigh in on the Spanish accent drama.

AceShowbiz - Dorit Kemsley has sounded off her support for Hilaria Baldwin in the midst of her heritage scandal. Around a week after the wife of Alec Baldwin took a break from social media due to accusations of her faking Spanish accent, the star of "The Real Housewives of Beverly Hills" expressed her hope for the former to make a comeback soon.

The 44-year-old offered her two cents during an Instagram Story Q&A session on Saturday, January 2. "I feel bad for what she's going through at the moment. I don't think she deserves it. I've had so much scrutiny over the way I speak, I've learned to ignore all the noise but at first it was really hurtful. I'm sure all of this backlash has been hard on her," she said when replying to a question about Hilaria.

"I don't know her but I've followed her for years and I hope she's back on social media soon," the TV personality further shared her hope. "I would love to see less trolling and bullying on social media in 2021. If you have nothing nice to say, don't say anything at all." 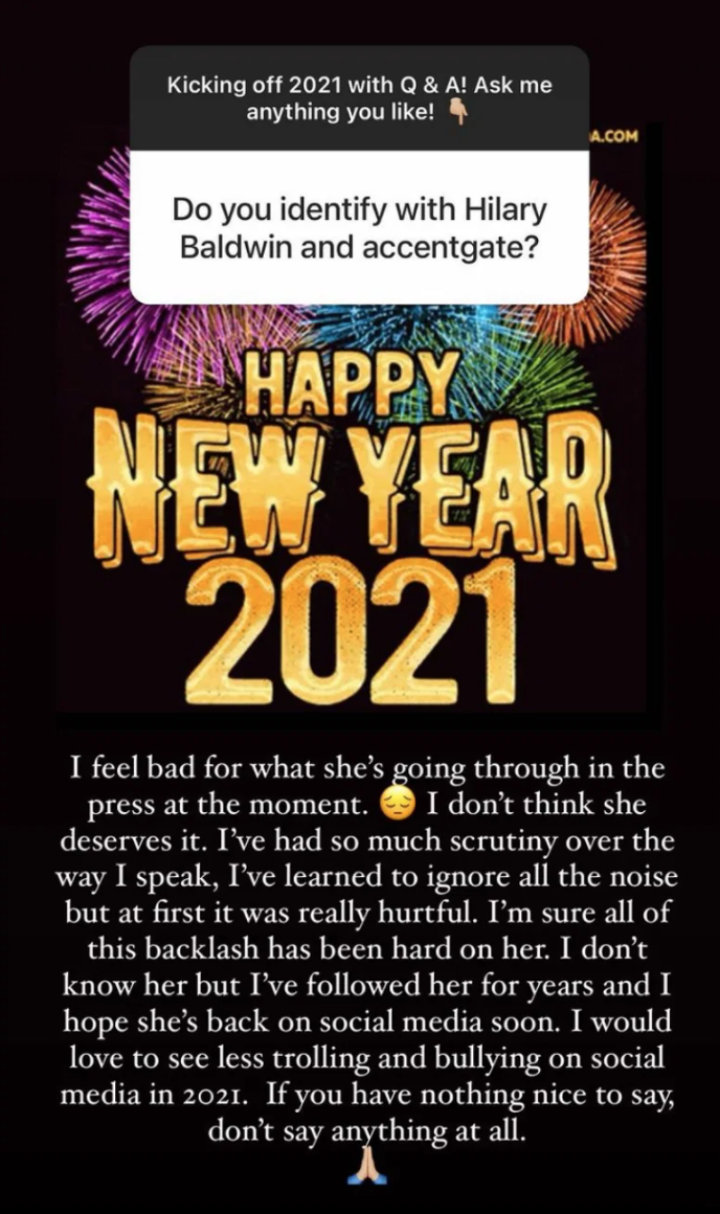 Aside from Dorit, Hilaria has also found support from Billy Baldwin and his wife Chynna Phillips over her Spanish accent drama. "This is probably an awkward and embarrassing time for Alec and Hilaria," Billy told The Post on Tuesday, December 29. "I've been texting Alec the whole time to make sure he's OK and if he needs anything." Chynna then chimed in, "My family has been through this before."

The 52-year-old singer went on to add, "I was born in a fishbowl, and this kind of stuff has been happening around me since 1968." She further defended the fitness expert in a video posted on YouTube the following day. "I feel terrible. Who's going to throw the first stone at my sweet sister-in-law? She's a good woman and you know none of us are perfect. We all have issues," she claimed.

Before announcing that she was taking a break from social media, Hilaria had responded to the allegations of her faking Spanish accent. "I'm born in Boston, and then I spent some of my childhood in Boston, some of my childhood in Spain… everybody is over there in Spain and now I'm here. So there was a lot of back and forth my entire life," she clarified in an Instagram video shared Sunday, December 27.