AceShowbiz - Meghan McCain is heading back to "The View". After taking some time off the show in order to prepare the arrival of her baby, the conservative talk show co-host will soon return to the show to join other co-hosts including Whoopi Goldberg, Joy Behar, Sara Haines, Sunny Hostin and Ana Navarro.

Announcing her return, Meghan took to her Twitter account on Wednesday, December 30 to write, "It's almost time...I'm so excited to take my spot as the conservative seat back at the Hot Topics table (virtually) @TheView on Monday!" Alongside a GIF of Christina Aguilera saying, "Momma came to play," on "The Voice", the 36-year-old added, 'Did I miss anything while on maternity leave?!?" 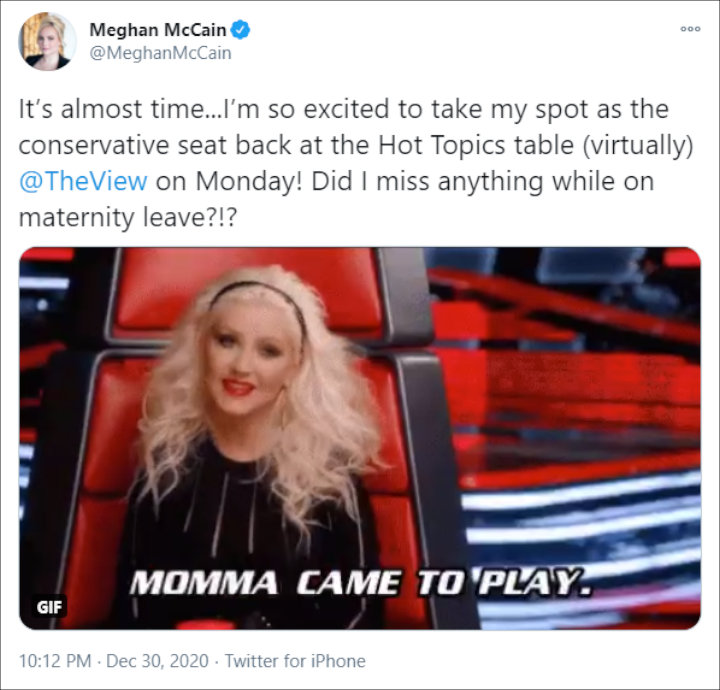 Meghan is set to return via Zoom on Monday, January 4. The week will feature a number of guests that include Lil Nas X, Ken Jeong, Dr. Sanjay Gupta, Ralph Macchio and William Zabka.

Meghan's return to the show is actually obvious with her shutting down rumors that she would never be back to the show. "Why does everyone ask me if I'm getting fired or quitting every 20 seconds?" the daughter of late Sen. John McCain said during her appearance on "Watch What Happens Live With Andy Cohen" back in August. "No other host has to deal with this BS. Yes, I'm coming back. It's an election cycle."

Meghan welcomed her daughter Liberty Sage McCain Domenech, whom she shares with husband Ben Domenech, September 28. The couple broke the exciting news in March, nine months after they revealed a heartbreaking miscarriage.

"My husband Ben and I have been blessed to find out I'm pregnant. Although this isn't how I expected to announce my pregnancy, both we and our families are excited to share the news with you all," Meghan announced. "I consulted with my doctors and they advised me that for the safety of our baby and myself, I should be extra vigilant about limiting the amount of people we come in contact with. Starting immediately, I'll be joining the millions of Americans who are self-isolating as a precaution to prevent the spread of COVID-19."

'The View': Joy Behar Tells Meghan McCain She 'Did Not Miss' Her During Heated Argument