The Young Money femcee makes the revelation after a fan asked her on Twitter, 'Did your water break at home and what was that experience getting to the hospital?'

AceShowbiz - Nicki Minaj has shared more details about her childbirth experience. During a Q&A session on Twitter, the "Anaconda" rapper recalled how her husband Kenneth Petty reacted when her broke in September ahead of giving birth to their first child together.

The revelation started after a fan asked Nicki on the blue bird app, "Did your water break at home and what was that experience getting to the hospital?" To the question, Nicki explained, "Yes. I was butt naked. Just got out the shower & I asked him to rub my back."

When asked if her husband was scared when that happened, the Trinidadian-born star replied, "As soon as I started scooting over to him in the bed I just felt the water start coming out. I was weirdly calm & I quietly said 'omg, I'm about to be in labor.' " The "TROLLZ" femcee said that while Kenneth "was very scared, she "was laughing @ him." 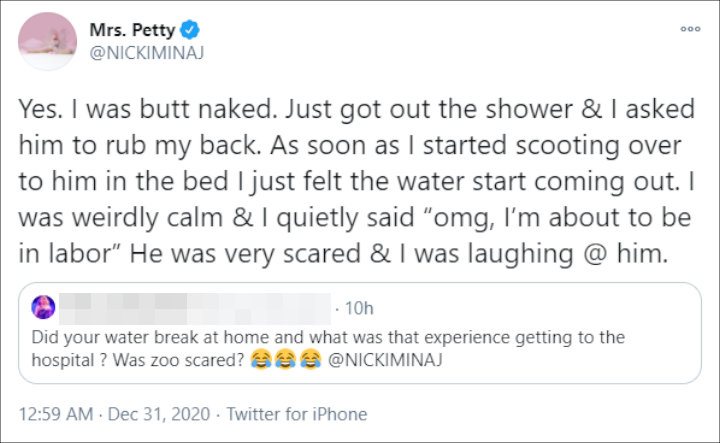 Nicki has been private when it comes to her newborn son, whose name has yet to be revealed. However, the Young Money artist occasionally shared with her fans tidbits of her baby. Back in November, she treated the Barbz to an audio clip of her baby boy greeting her fans.

In the clip posted on her Twitter page, the rapper was trying to conversing with her son. "Say hi to the Barbz, papa bear. Say hi," she said to the infant. "Whatcha doin'? Say something." As the baby was heard cooing, the 37-year-old proud mom laughed before praising her son, "Aww, you said hi to the Barbz? Good boy. Good boy."

Opening up about motherhood, the new mom also revealed that her son wanted her "undivided attention." Last night I tried to tweet while I was feeding him. He looked @ me & said 'absolutely TF NOT.' He wants his undivided attention chile," she tweeted on November 5.

Thankfully, Nicki hinted that she won't hide her child forever. "Can't wait til he meets you guys," she later shared on Twitter. "I wonder if he'll like yall? He's prob gonna be so confused at first. Like why yall so loud? That lady ain't nobody she just my mom."