Less than an hour after the 'Bad Guy' hitmaker participates in the 'post a picture' challenge on Instagram, a Twitter user notices her followers dropped from 73 millions to 72.9 millions.

AceShowbiz - Billie Eilish was left amused by claims of her losing followers on social media. Upon learning from a tweet that around 100,000 people have unfollowed her on Instagram after she posted breast art pictures, the "Bad Guy" hitmaker could not help but poked fun at it.

The 19-year-old first took a part in the "post a picture" challenge on Monday, December 28. After getting a request to upload "a drawing [she's] really proud of," she shared some sketches of bare bodies and boobs on her Story feed and quipped, "these probably lol i love boobs." She also put out a screenshot of her phone screen that displayed two naked women.

Less than an hour after Billie participated in the trend, a Twitter user noticed that the numbers of her followers dropped from 73 millions to 72.9 millions, and made a tweet out of it. It prompted the 10-time Grammy winner to repost the side-by-side comparison picture of her page on Instagram Story, and commented, "LMFAOOO y'all babies smh." 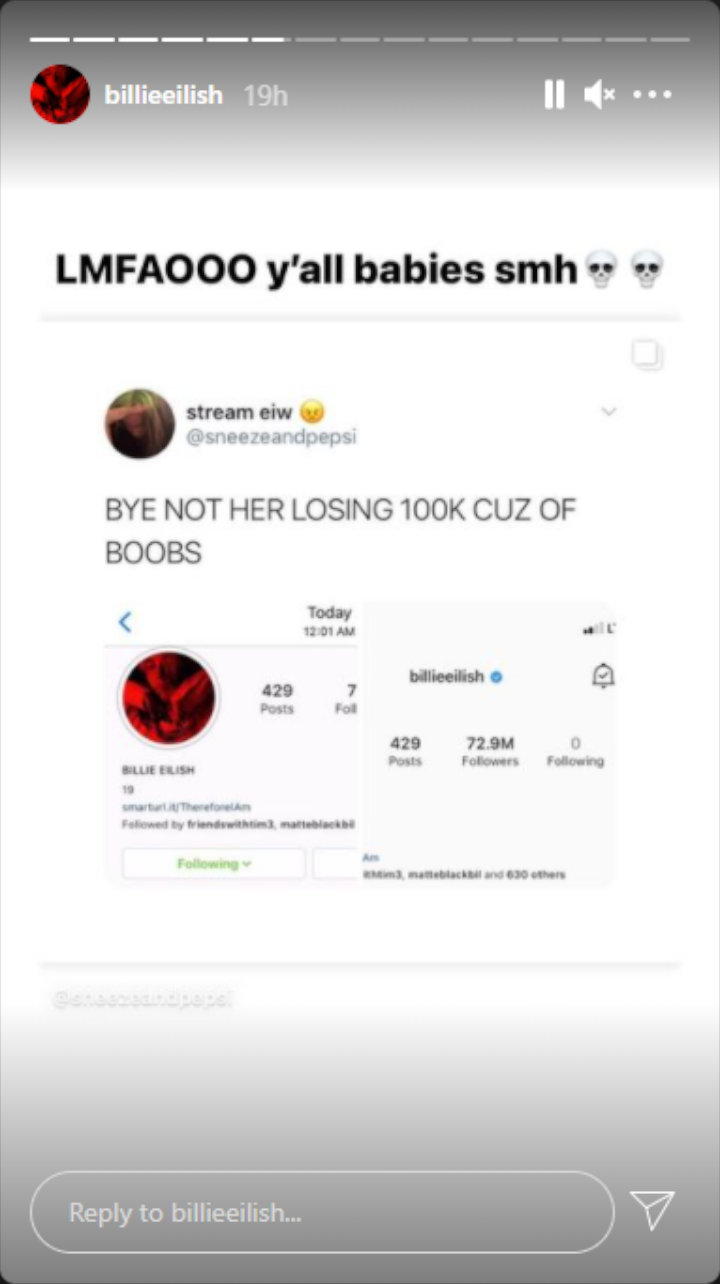 This was not the first time the "Therefore I Am" singer offered a clapback to her online devotees. A week prior, she lightheartedly threatened against putting out a sophomore album out if her fans kept teasing her over her black and lime-green hair.

Making use of Instagram Story on December 21, Billie first kicked off a series of clips by stating, "OK, I have a fun story to tell you." She then added, "But first, f**k you guys. Stop making fun of me, oh my god! I'm f**king making you an album. I will not put it out if you keep making fun of my hair! Shut up!"

"I'm changing it after the doc comes out," Billie said of her upcoming documentary "Billie Eilish: The World's a Little Blurry". She went on to promise, "It'll be the end of an era. I'm gonna give you a new era. I have announcements to make, I got some s**t to put out. Anyway, doesn't matter. Leave me alone. Let me live with my f**king hair that I've had for way too long. Okay? Shut the f**k up."

Report: Chris Harrison Is Not Exiting 'Bachelor' Franchise Despite Moving to Texas

Billie Eilish Felt Lonely as She Struggled With Depression During Tour