The rapper and record producer, who was raised in Atlanta, calls for tougher policing as he condemns the incident near Phipps Plaza which has left the girl in critical condition.

AceShowbiz - Jermaine Dupri has reacted to unpleasant news that came right before Christmas. An Atlanta family is dealing with a heartbreaking tragedy after a seven-year-old girl was shot near a mall.

According to reports, Kennedy Maxie was out for a holiday shopping with her family on Monday night, December 21 during the incident. She was in a car with her mother and aunt as they were riding past Phipps Plaza when she was struck in the back of the head by a stray bullet.

The mom and aunt initially didn't realize that the child had been injured, but once they were alerted of her injuries, they immediately called authorities while rushing Kennedy to the hospital. The girl reportedly remains hospitalized in critical condition.

The incident has caught the attention of Jermaine Dupri, who was born in Asheville, North Carolina but raised in Atlanta. Having been an advocate for the city, he has now expressed his rage over the tragedy while calling for tougher policing to keep everyone in the city safe.

"If you really from the A,it's time for us to come together and stop all this shooting s**t at Lenox," so the 48-year-old tweeted on Thursday, December 24. "And now Phipps,the police need to get tougher,the profiling needs to go to code red and I can give a f**k about y'all getting mad about me saying this,lil kids getting shot is wack." 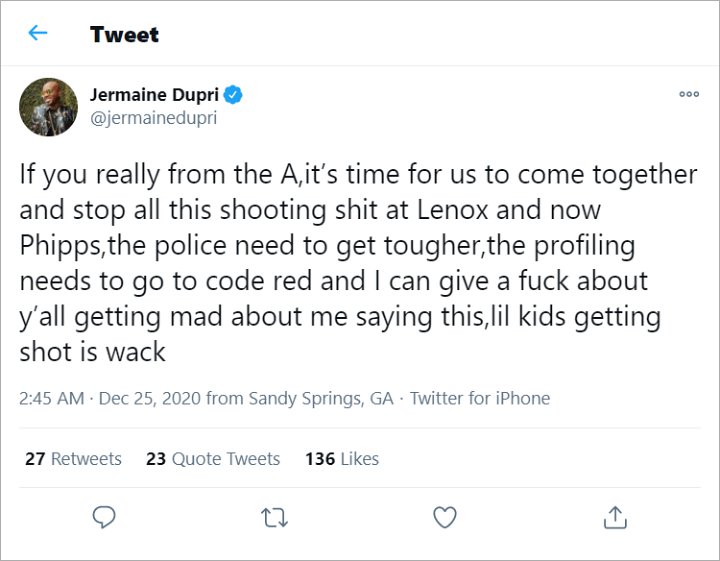 Jermaine Dupri condemned the shooting of a 7-year-old girl in Atlanta.

Agreeing with Jermaine, one of his followers commented on his post, "I know worse words than wack to use in describing those who shoot kids...killers. No matter what f**king excuse in custody or on the lamb. #ProtectOurChildren @MayorBMScott in Bmore too! ATL! Brownsville! Minneapolis!"

Interim Police Chief Rodney Bryant also condemned the shooting, saying in a statement, "Once again we're addressing a situation of a senseless shooting that we believe arose from individuals unable to resolve a situation civilly."

A $15,000 reward has been offered for information that could lead to the arrests of the person responsible for Kennedy's injuries. FOX5 Atlanta reporter Eric Perry shared the news on Twitter on Wednesday, "This is 7-year-old Kennedy Maxie. She was shot in the head while she was in the car with family passing Phipps Plaza in Buckhead. Police believe an argument in the area of the mall lead to her being hit by the stray bullet. There's a $15,000 reward for info @FOX5Atlanta." He added in a separate tweet, "At last check She's in critical condition in the hospital. Please keep the family in your prayers."