The 'Suicide Squad' director sends the Internet buzzing after answering comedian Mike Birbiglia's inquiry about the one movie he 'pretends' he's watched so people aren't 'outraged'.

The filmmaker - who is known for helming films such as "Guardians of the Galaxy" and "Super" - has confessed the 1985 family classic is the one movie he "pretends" he's watched so people aren't "outraged".

Comedian Mike Birbiglia asked his followers: "What a movie you consistently nod in agreement about having seen in casual conversation when in fact you've never seen it and never plan to see it? I'll start: 'Cold Mountain'."

Mike Birbiglia asked fans to name the one movie they 'pretends' they have watched.

To which, Gunn replied: "Goonies."

After Twitter exploded with his responses, Gunn put the question to his own followers.

"People seem to be shocked my answer is Goonies," he wrote. "What movie do you nod & pretend you've seen just because you don't want to have to deal with your acquaintances being outraged you haven't seen it? This is my opportunity to be outraged with the movies you haven't seen."

James Gunn reacted to people's surprise that he has not seen 'The Goonies'.

And when the director revealed the top films people listed, some confused the list with movies he hasn’t seen himself. 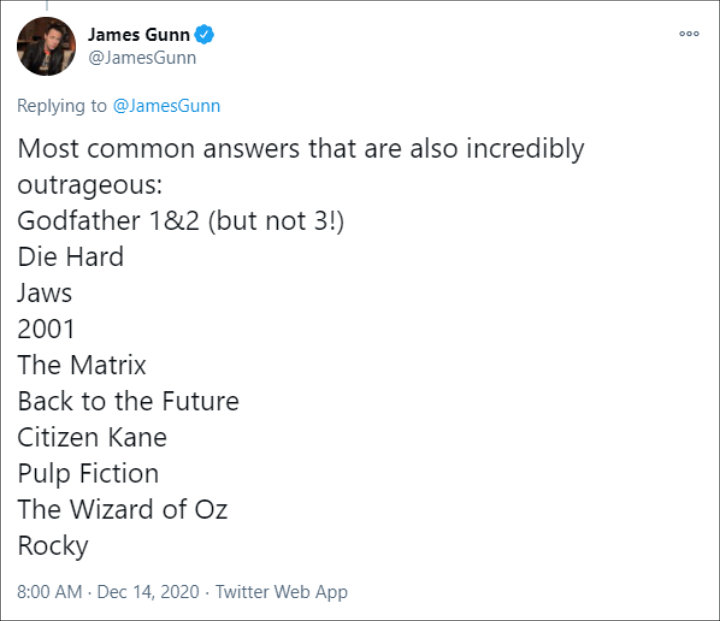 James Gunn listed movies others have not seen that outraged him.

James Gunn offered some clarification about the movies he listed.

He then clarified: "This is not a list of movies I haven’t seen - I’ve seen all of them many times. It's movies I find outrageous if you haven't seen them."

James Gunn Worried His Career Was Over After 2018 Disney Firing