The former star of 'The Mindy Project' reveals her son Spencer's middle name when responding to a fan who asks her about the 3-month-old boy's 'very Caucasian' name.

AceShowbiz - Mindy Kaling made sure her Indian heritage be a part of her two children. The former star of "The Mindy Project", who just gave birth to her second child three months earlier, has recently revealed that both her 2-year-old daughter, Katherine, and her newborn son, Spencer, carry Indian middle names.

The 41-year-old comedienne made the revelation when a fan asked her why her children have "very Caucasian" names. "Not my business but do your children have Indian middle names? You are proud of your culture and I was wondering why the kids have very Caucasian names," the individual asked after she shared her Vogue India cover photo on Instagram.

In response, the co-creator of "Never Have I Ever" divulged in the comment section of her Thursday, December 3 post, "They do! Swati and Avu!" She went on to note that Swati is her actually her mother's name, before gushing, "It's gorgeous and meaningful." 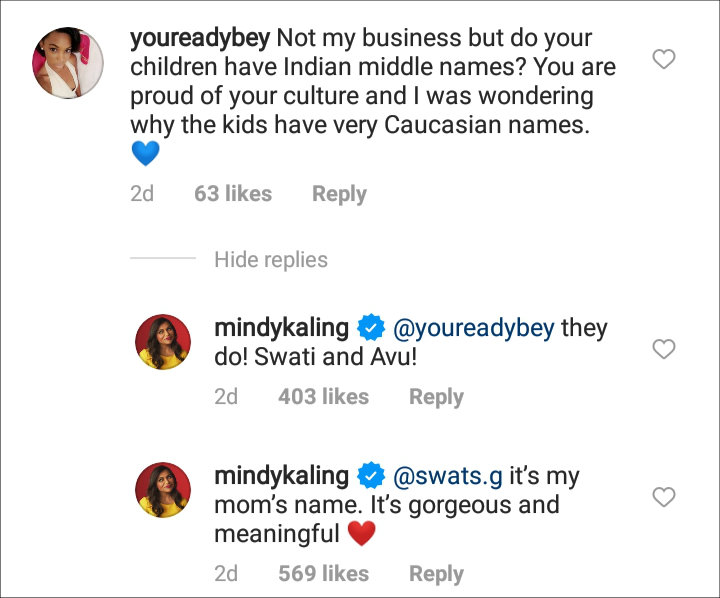 In the Thursday post itself, the "Ocean's 8" actress confessed that she was close to rejecting the opportunity to be Vogue India's cover girl. "I was so excited to be asked to be the cover of @vogueindia's December issue but seriously nervous because I would have to shoot it six weeks after giving birth to my son Spencer. I was not feeling body confident, and even considered saying no," she spilled.

"But @katiegreenthal and Vogue surrounded me with talented and wonderful people, and now I'm thrilled I have these photos as a memento of this very specific time in my life," the mother of two added. " 'Post partum pandemic fabulous' is what I like to call it. Thank you @vogueindia, I love you! More photos to come. Enjoy!"

Mindy announced Spencer's arrival a month after she quietly welcomed the baby boy. Speaking to Stephen Colbert in the October episode of "The Late Show with Stephen Colbert", she divulged, "I'm telling it for the first time now, it feels so strange. But I gave birth to a baby boy on September 3."