The 'A Rainy Day in New York' actress questions both websites' policies for allowing Neo-Nazis selling racist products on their accounts on those two platforms.

AceShowbiz - Selena Gomez has once again shown her concerns for social media and its negative influence. The 28-year-old singer/actress, who has a massive fanbase on Instagram with 195 million followers, has criticized the photo-sharing platform and its sister site Facebook for giving a platform for Neo-Nazis.

On Wednesday, December 2, the "A Rainy Day in New York" star put both Instagram and Facebook on a blast on Twitter for not taking down Neo-Nazi pages. She retweeted a post which shared a screenshot of those troubling accounts that are selling racist products.

"Neo-Nazis are selling racist products on Facebook and Instagram. Facebook has left these pages online, despite being told about them 3 days ago. @Facebook, please remove this neo-Nazi network in full, now," the original tweet alerted. Selena then questioned the two sites' policies, writing along with the retweet, "I'm speechless. @Facebook @Instagram how are you tolerating this hate? There's still accounts there even though you have been notified!!" 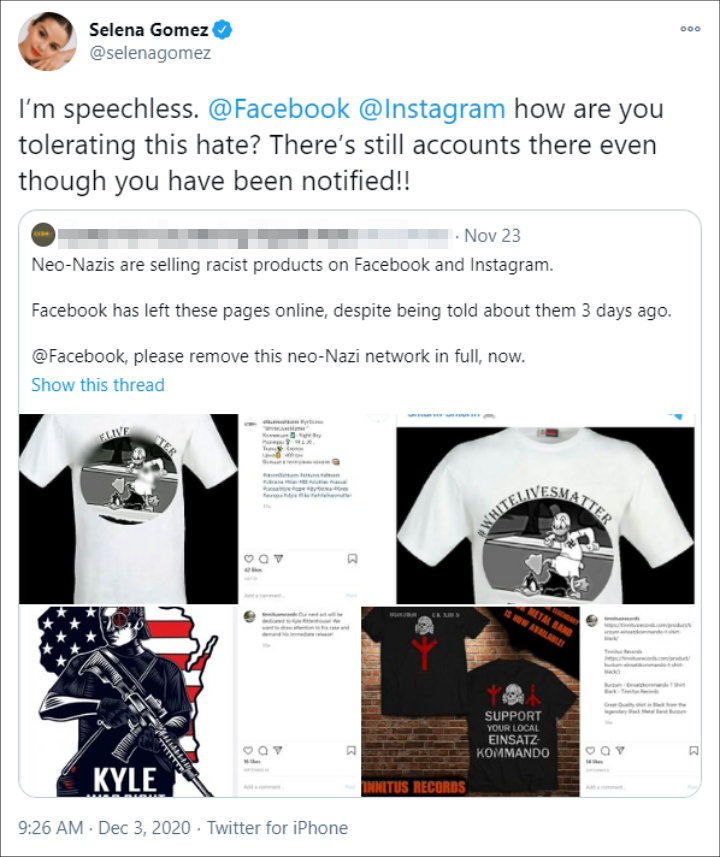 Selena has previously publicly criticized Facebook and Instagram for allowing "hate, misinformation, racism, and bigotry" on both platforms. The "Wolves" hitmaker initially sent a private message to Facebook CEO Mark Zuckerberg and COO Sheryl Sandberg about the matter, but after failing to receive a response, she went public on her Instagram Stories with her complaint.

In the message, she penned, "Facebook and Instagram are being used to spread hate, misinformation, racism, and bigotry." She pleaded, "I am calling you both to HELP STOP THIS. Please shut down groups and users focused on spreading hate speech violence and misinformation. Our future depends on it."

Selena went on to note that the upcoming U.S. election is just 46 days away, adding, "We cannot afford to have misinformation about voting. There has to be fact-checking and accountability. Hope to hear back from you ASAP."

In October, Selena also called out Google for allowing ads that spread false information about the election. She wrote to CEO Sundar Pichai via Instagram DM, "Hi Sundar, although we have never met, I just learned that Google is making millions of dollars putting ads on websites that spread disinformation about our election."

The former star of "Wizards of Waverly Place" went on to note, "I'm hoping you are also just finding this out too. Please shut this down immediately. The fate of our country depends on it." She signed her message by writing, "Thanks, Selena."