The 73-year-old 'Terminator' star can be seen beyond impressed by his son who can easily lift 'freaking 400 pounds' before jokingly calling the 27-year-old a 'monster.'

AceShowbiz - The Schwarzeneggers apparently have their own unique style to bond on Thanksgiving Day. While getting ready to enjoy the holiday dinner, Patrick Schwarzenegger and his former California governor father, Arnold Schwarzenegger, spent time together by having a workout session.

On Thursday, November 26, the leading man in "Midnight Sun" posted a video of him lifting some weights with his dad watching and encouraging him. "Alright, let's go. Eight reps," his "Terminator" star dad could be heard telling him, before pressing on by counting, "One. Two. Pound it against the chest."

While Arnold told him to do eight repetitions, Patrick decided to surprise his father by adding two more reps to his set. Impressed by his strength, the 73-year-old exclaimed, "Holy s**t." He further raved, "This man is a monster... This is freaking 400 pounds."

The clip saw Patrick wore a dark gray t-shirt with matching shoes. The 27-year-old completed his look with a pair of sweatpants and a yellow trucker hat. His father, in the meantime, sported a blue tee, black pants and matching sneakers. The "Daniel Isn't Real" actor captioned the post, "PRE THANKSGIVING PUMP." 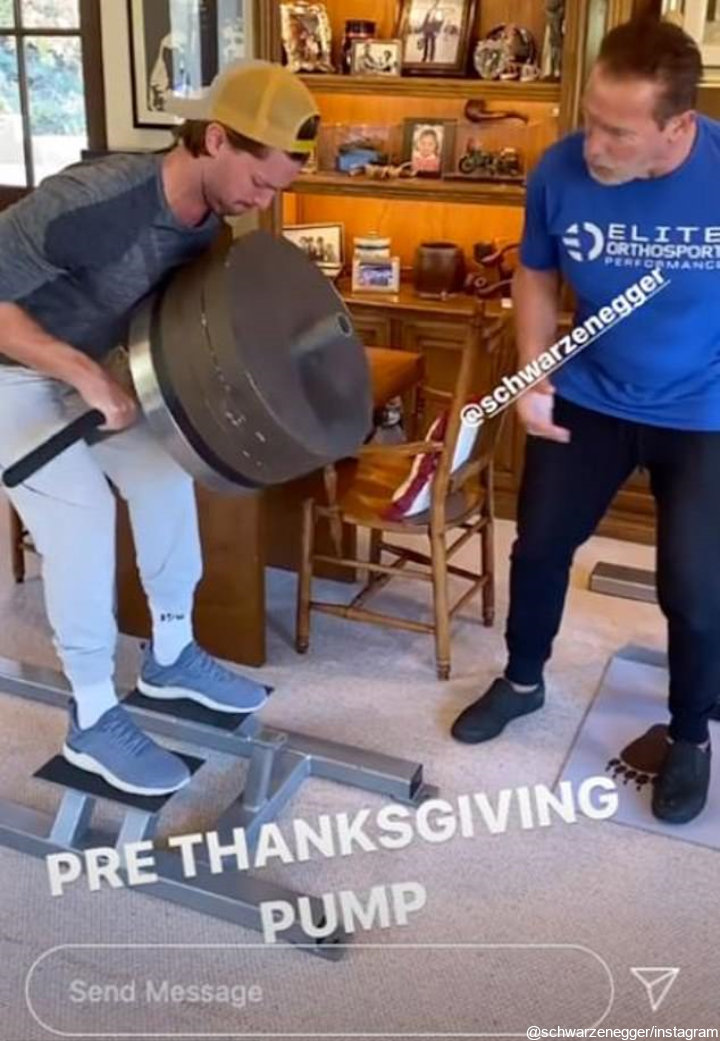 Patrick is Arnold's third child with his ex-wife Maria Shriver. He has been following his father's footsteps in acting. Two weeks earlier, he told "Today" that his father is "so proud" of him. "Both my parents are proud of me," he mentioned. "It's pretty surreal 'cause I remember growing up and going to set with him and it was like my favorite activity."

"I was so sad when he became governor and to go from Universal Studio's lot to the Capitol. But it was really surreal to have him come to set have kind of the pages turned. He's really proud of me and they're so supportive," he emphasized. "I couldn't ask for a better parent duo."