In a social media video shared by the Olympic gold medalist, the 'Captain America' star could be heard telling his dog Dodger to be gentle while playing in the backyard with her new puppy Mylo.

AceShowbiz - Chris Evans' heart has apparently been won over by Aly Raisman's newest four-legged companion. After his pet Dodger enjoyed an "energetic" play date with the Olympic gold medalist's puppy Mylo on Saturday, November 14, the "Captain America: The First Avenger" star joked on social media that her rescue dog failed to charm him.

The 39-year-old actor turned to his Instagram Story feed on Sunday, November 15 to share a clip of him holding Mylo in his arm and kissing the pup while John Parr's 1985 song "St. Elmo's Fire (Man in Motion)" played in the background. Over the sweet footage, he playfully noted, "Too bad his charm didn't work on me."

Shortly before that, the "Knives Out" actor put out another video of Mylo excitedly playing with Dodger in the backyard. "Dodger had a very energetic play date yesterday…," he wrote over the clip in which he was heard laughing as the smaller canine ran around. 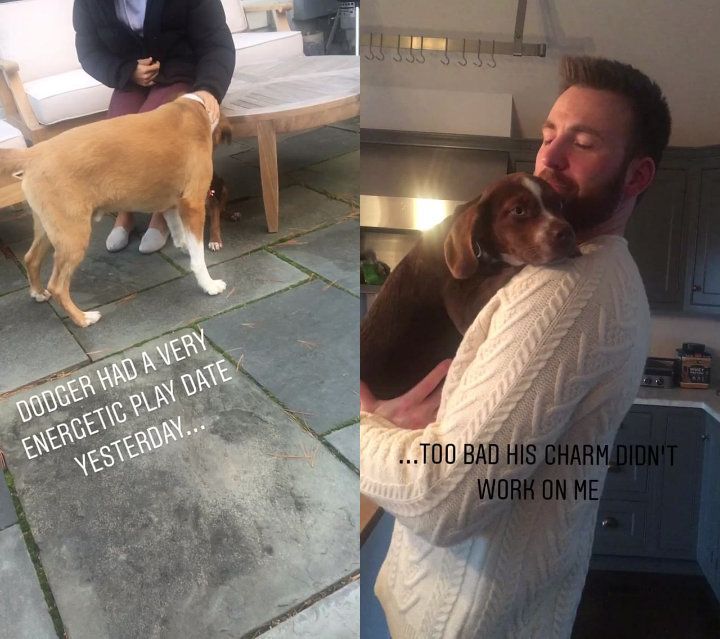 Chris was not the only one sharing the fun-filled play date on social media. Aly also made use of Twitter to share a clip of Chris cuddling to her pup. "Best buds @ChrisEvans," she tweeted. She also posted a 28-second-long video in which Chris could be heard telling Dodger to be gentle while playing with Mylo. "Be gentle, be gentle," he was heard saying. "You got a new buddy?"

Aly first introduced her new puppy via Twitter and Instagram back in October. Letting out a series of pictures and one clip of her new furry pal, she wrote, "Meet Mylo. I rescued Mylo yesterday from @heartofri shelter. He was born July 16, 2020. I'm so excited to be his mom. I've already cried a few times because I feel so lucky."

The 26-year-old went on to gush over her new family member. "He kept me up most of the night but I loved being able to comfort him & make him feel safe. Mylo is very sweet & loving & as each moment goes by he gets a little more confident & comfortable," she raved. "He's currently napping on my chest. I can't wait to get to know him."

"The video was taken yesterday by my mom right before the adoption was official," she continued dishing. "We are not sure what mix he is. The shelter didn't know his mom or dad. Wondering where he got those beautiful blue eyes from. Thank you @heartofri for a beautiful experience. I wish I could take all of the dogs home."

As for Chris, the "Avengers: Endgame" actor met his furry friend, Dodger, while filming the "Gifted" movie in 2015. He admitted that the dog, whose name got tattooed on his chest, was the reason behind him finally joining Instagram.