The Food Network presenter apologizes after receiving backlash for comparing today's political climate to the genocide of the European Jew in since-deleted tweets.

AceShowbiz - Alton Brown has regretted his "flippant" Holocaust remarks. Finding himself under fire for comparing today's political climate to the genocide of the European Jew in since-deleted tweets, the "Good Eats" star offered an apology and blamed his "poor taste" for making such comments.

The Food Network presenter expressed his remorse via Twitter on Wednesday, November 11. "I apologize for the flippant reference I made to the Holocaust in my tweet last night. It was not a reference I made for humorous effect but rather to reflect how deeply frightened I am for our country. It was a very poor use of judgement and in poor taste," he explained.

Alton Brown issued an apology for his Holocaust remark.

Alton received backlash after he posted tweets with Holocaust reference. "So, when they move us to the camps, do you think they'll let us choose the state? I'm going to ask for Kansas because the sky is so gorgeous there...over the wheat," he first tweeted on Tuesday, November 10. He then sent out another tweet that read, "Do you think the camp uniforms will be striped, like the ones at Auschwitz, or will plaid be in vogue?"

The celebrity chef's second post prompted a fellow social media user to comment, "Yikes dude. Take it easy." In deviance, he fired back, "F**k you." Another follower, however, played a long and suggested that it would "depend on what you're worth when you go in." In response, the 58-year-old wrote back, "no gold filings." 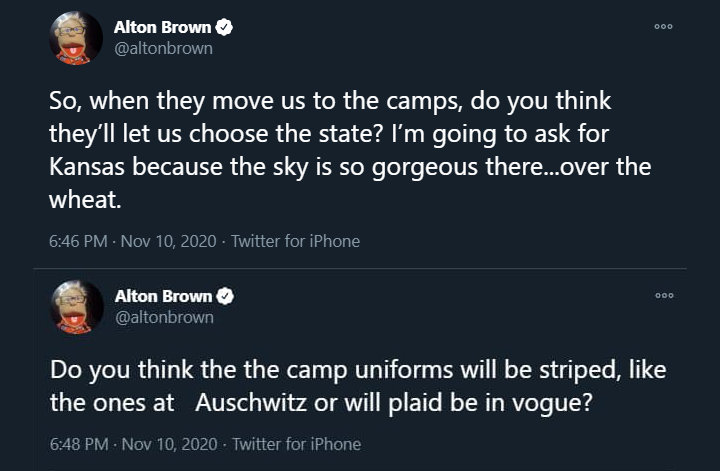 Alton's tweets led to another stern objection. "Auschwitz and gold fillings huh? ....If you have to dig in other people's graveyards for references of pain to relate your discomfort to an oppression you've never really known by a longshot, just keep your mouth shut and think deeper before you speak. Food world man," the critic raged. 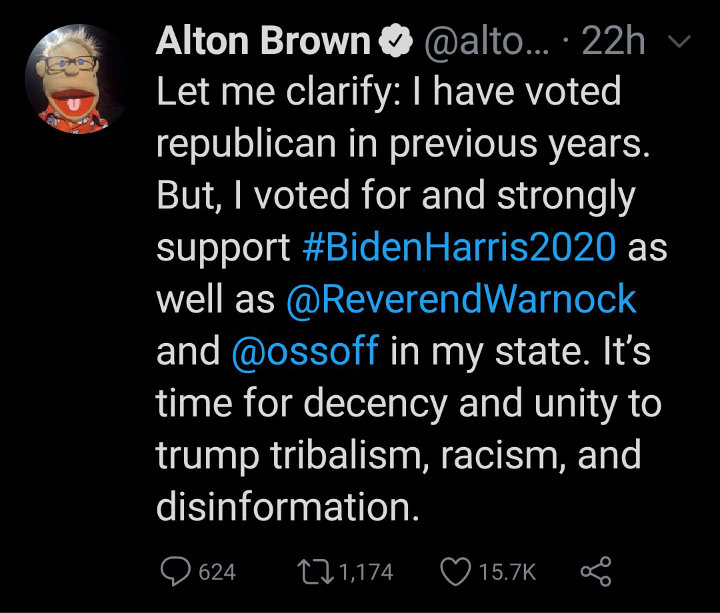 Alton Brown revealed he had been Republicans for most of his life.

Before posting the Holocaust remarks, Alton revealed that he had been Republicans for most of his life before changing his political party affiliation. "I have voted republican in previous years. But, I voted for and strongly support #BidenHarris2020," he spilled in a tweet that has also been deleted. "It's time for decency and unity to [Donald Trump]'s tribalism, racism, and disinformation."