The 'Million Dollar Baby' star finds herself being criticized for sharing her political opinion after she posted on social media a photo of Vice President-Elect Kamala Harris post-giving victory speech.

AceShowbiz - Hilary Swank refused to be silenced when it came to sharing her political opinions. When rejoicing over the historical win of Vice President-elect Kamala Harris, the "Million Dollar Baby" actress found herself being forced to defend herself against a social media user who was against celebrities speaking out about it.

The 46-year-old actress was met with online criticism on Sunday, November 8 when she posted an Instagram photo of the California senator posing with her great-nieces after giving her winning speech. Her caption for the snap referred to a part of the politician's speech and it read, "The first, but not the last: Vice President-elect @kamalaharris."

Many of Hilary's followers showered her with positive feedback. One person, however, expressed displeasure over her post. "I don't think it's ever smart for celebrities to share their political opinions, 71 million Americans who voted for Trump this election," the critic wrote in the comment section.

"Yeah focus…. Because social media and the news do not announce the election," the individual continued. "It's different this time around because we have authoritarians in big tech censoring conservatives. You don’t need to demean yourself for being white. Just be chill."

The comments did not go unnoticed by Hilary who then fired back at the hater, "I don't care who likes me and who doesn't like me. I am an artist, I make art and I stand up for what I believe in." She further emphasized, "I'm never quiet on things that matter and always stand up for people that need their voices heard. Which is pretty indicative in the stories I tell." 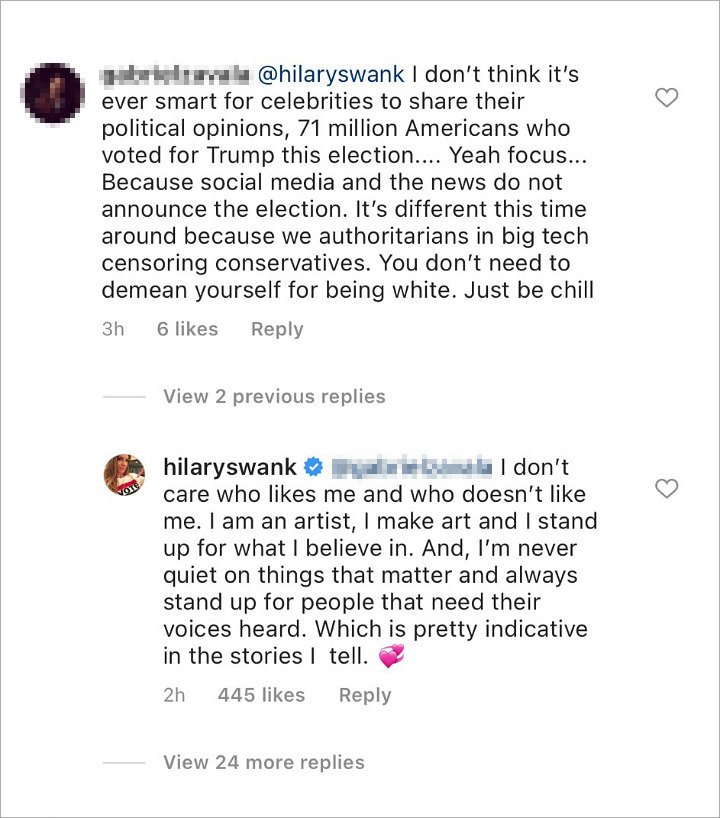 Hilary Swank hit back at a hater who tried to silent her political opinion. 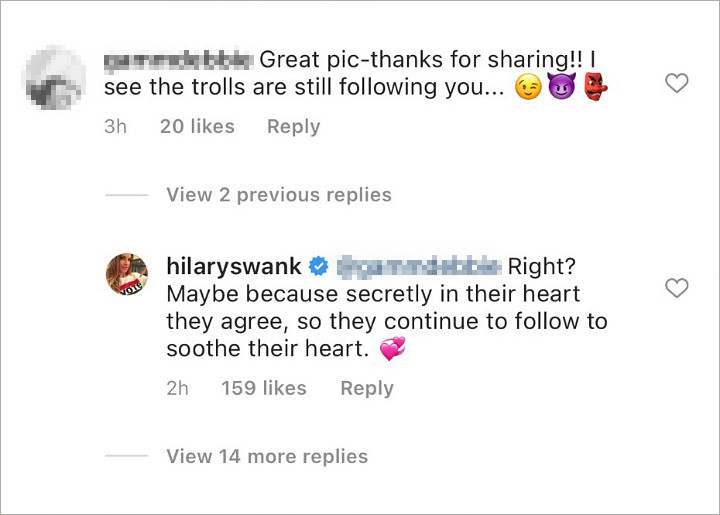 Hilary Swank responded to a fan giving her support amid the criticism.

In the wake of her clapback, the "P.S. I Love You" star collected more support from her fans. One in particular noted, "Great pic-thanks for sharing!! I see the trolls are still following you…" To this particular comment, she replied, "Right? Maybe because secretly in their heart they agree, so they continue to follow to soothe their hearts."

Hilary Swank Hit With 'Double the Sickness' Amid Twin Pregnancy

Hilary Swank Over the Moon as She's Pregnant With Twins