Disappointed by the 45th POTUS' persistent denial of his loss at the recent presidential election, the 'Borat' star jokingly claims he rescinds his job offer to Trump.

AceShowbiz - Sacha Baron Cohen couldn't miss a chance to take a jab at Donald Trump after he lost the presidential election to Joe Biden. As the incumbent president's Democratic rival is projected to win the election, the actor/comedian mocked the businessman-turned-politician's reaction to his defeat.

Back in October, the "Borat Subsequent Moviefilm" actor jokingly offered a job to Trump, seemingly predicting his loss in his second run as president. He said, "I'm always looking for people to play racist buffoons, and you'll need a job after Jan. 20. Let's talk!"

But now the English funnyman has changed his mind, claiming to have been disappointed by Trump's "tragic and sad" response to the election results. "Donald-you're out of work and I know I offered you a job. But your performance this past week was tragic and sad. Offer rescinded," he tweeted on Saturday, November 7. 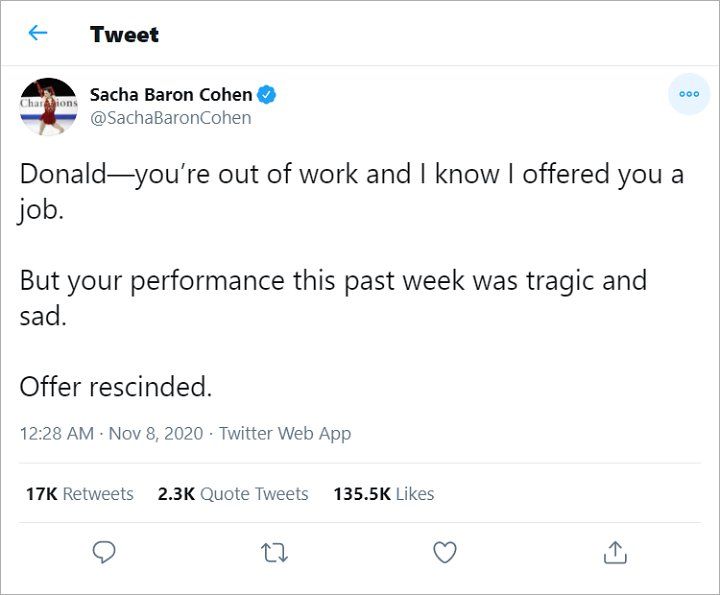 Cohen also targeted Facebook founder and CEO Mark Zuckerberg, who has been criticized for working with Trump and allowing right-wing misinformation to spread on social media. Posting a picture of Trump's meeting with the computer genius, the actor wrote, "One down. One to go." 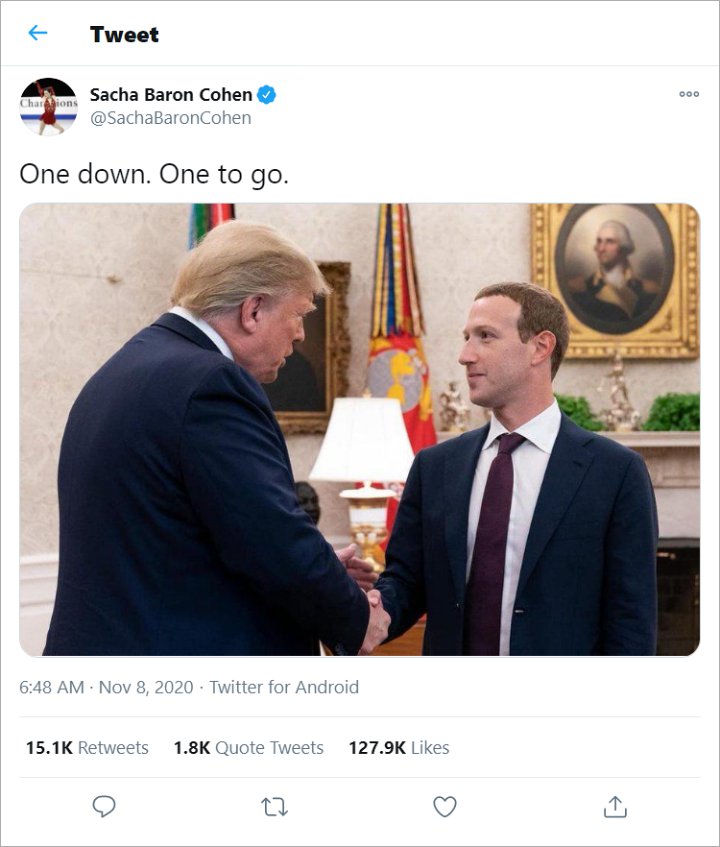 Cohen isn't the only one who has mocked Trump for his persistent denial to his election defeat. Anderson Cooper previously called the 45th POTUS "an obese turtle" in his comments on the president's tweets regarding what he claimed to be election fraud.

"That is the president of the United States. That is the most powerful person in the world. And we see him like an obese turtle on his back flailing in the hot sun, realizing his time is over," the CNN anchor said on Thursday after Trump claimed he was cheated of victory.

However, later on Saturday during an interview with former presidential candidate Andrew Yang, Cooper apologized for his scathing remarks. Yang, borrowing Cooper's words, said of whether he believes Trump will concede the election, "I'm happy to say, it seems like Trump is going to be, in your words, an obese turtle on his back, just flailing around, Anderson."

Cooper then responded, "By the way, I should say, I regret using those words because that's not the person I really wanna be. It was in the moment, and I regret it."