The Captain America of MCU blasts Trump after the incumbent president claims that he's being cheated of victory and alleges that mail-in ballots are subject to 'fraud.'

AceShowbiz - Chris Evans has reacted to Donald Trump's apparent denial of the results of presidential election. While the final numbers have not been released yet, the incumbent president's future looks bleak with his Democratic challenger Joe Biden leading with 264 out of the minimum 270 electoral college. Thus, in his speeches, Trump has been falsely claiming fraud, believing that he would win if only "the legal votes" were being counted.

As many Republicans are apparently buying Trump's words, Evans took to Twitter to mock Trump's supporters while slamming the president for his "lies." Without naming the president, the 39-year-old wrote on Twitter, "Wow. Hey Republicans, are you listening to this come-to-life toilet spew complete lies about the integrity of our democratic process?"

Evans also retweeted a post about Anderson Cooper's hilarious diss at Trump during his recent news broadcast. Describing the 45th POTUS' update on the state of the vote count, the CNN anchor likened Trump to "an obese turtle." He said on live TV, "That is the president of the United States. That is the most powerful person in the world, and we see him like an obese turtle on his back flailing in the hot sun."

On Thursday evening, November 5, Trump spoke at the White House briefing room, claiming that "if you count the legal votes I easily win." He added, "If you count the illegal votes they are trying to steal the election from us."

Trump went on alleging there is "tremendous litigation" going on, believing that mail-in ballots are subject to "fraud." He insisted, "We think we will win the election very easily, and there is going to be a lot of litigation, and it could end up in the highest court in the land, we'll see."

Meanwhile, his son Donald Trump Jr. continues supporting his father and Trump's unfounded claims about the election fraud. He tweeted, "The best thing for America's future is for @realDonaldTrump to go to total war over this election to expose all of the fraud, cheating, dead/no longer in state voters, that has been going on for far too long. It's time to clean up this mess & stop looking like a banana republic!" 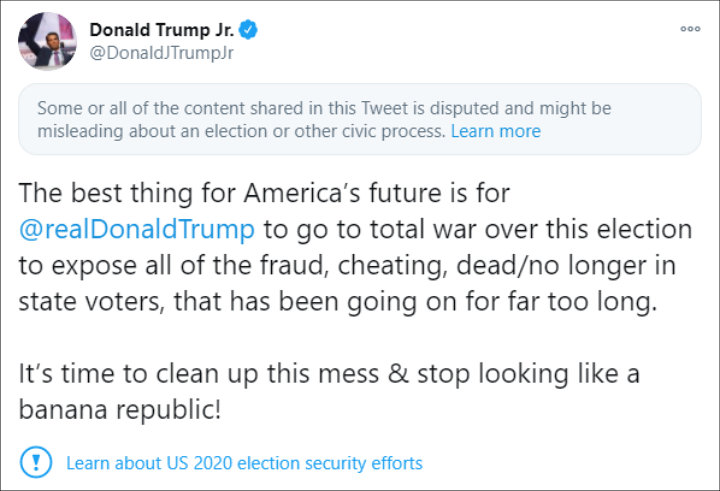