Andy Cohen Plans to Revive 'The Real Housewives of Miami'

In other news, the 'Watch What Happens Live with Andy Cohen' host angers people online for defending former Sen. Claire McCaskill for using a controversial term for transgender people.

AceShowbiz - Andy Cohen is planning to bring "The Real Housewives of Miami" back. The Bravo executive producer revealed in the Thursday, November 4 episode of the "Everything Iconic" podcast that he's been eyeing Peacock as a new home for the fourth season of the reality series.

"I have really been trying to get Peacock to pick up 'Miami'," the "Watch What Happens Live with Andy Cohen" host said. "I don't know if I'm allowed to say this. I don't know where we are with that. I have to say the fans of 'Miami' are still very vocal, and so I've been an advocate for Peacock bringing back 'Miami'."

When asked about the reason why the series wasn't as successful as other "Housewives" series, Andy shared that cast member Elsa Patton's health issues affected "RHOM". "I think 'Miami' as it was on Bravo really suffered from Mama Elsa not being around in season 3," Andy said of Elsa, who died in May 2019 at the age of 84.

"She was very sick. I think she was a more important part of that show than people realized. The problem with the third season was that the ratings were declining as it went on and they went down for the reunion, which is usually the opposite of what happens. I think that went into the decision to not pick it up," he went on saying.

In other news, Andy angered people online for defending former Sen. Claire McCaskill for using a controversial term for transgender people. She used the word "transsexuals" instead of "transgender" during an MSNBC interview on Wednesday, earning her backlash.

In response to the criticism, Claire offered a public apology by writing on Twitter, "I'm so sorry I used hurtful term last night.I was tired,but never a good excuse.People have misinterpreted what I was trying to say.Our party should never leave behind our fight 4 equality for trans people or anyone else who has been marginalized by hate. My record reflects that." 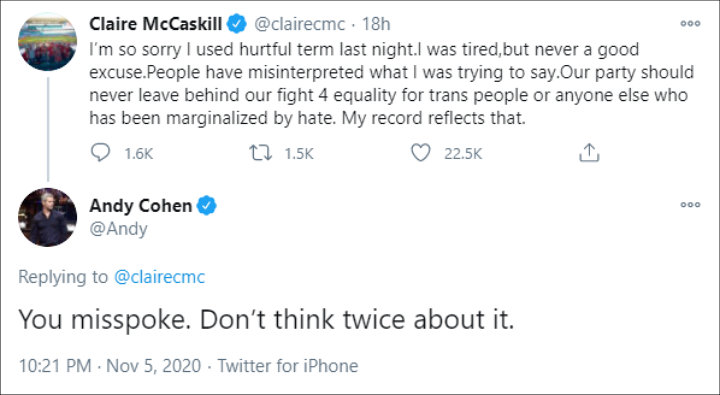 Andy caught wind of the tweet and offered support. "You misspoke. Don't think twice about it," he replied. Fans quickly attacked the TV personality as one wrote to him, "Go screw yourself, @Andy. Who tf do you think YOU are to tell her it's all ok that she s**t on trans people?" Another person wrote, "Don't forgive her on behalf of someone else. That's not your place."

'Real Housewives of Miami' Gets a Reboot Treatment on Peacock