Like millions worldwide, the Australian rapper is left frustrated a winner has still not been announced between the current president and his Democratic challenger Joe Biden.

AceShowbiz - Iggy Azalea has expressed her hatred for U.S. President Donald Trump and his supporters after a social media user warned her to be "careful" with her political views.

The Australian rapper had been vocal on Twitter in the lead up to Tuesday's (November 03) U.S. presidential election, and like millions worldwide, she is frustrated a winner has still not been announced between Trump and his Democratic challenger Joe Biden - and she has refused to keep her thoughts on the subject to herself.

On Wednesday, Iggy retweeted a fan-made graphic featuring a split screen image of herself appearing to give Trump the middle finger, adding a grinning devil emoji. 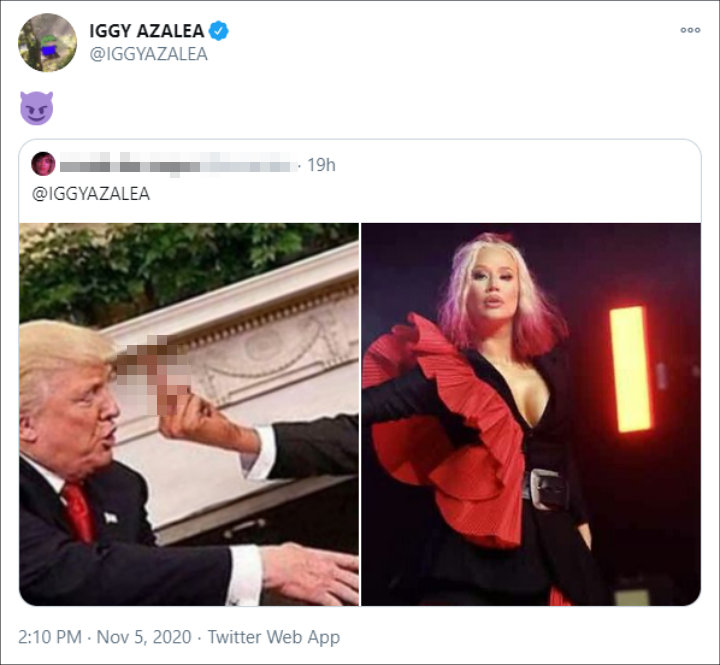 One follower didn't appear to appreciate the post and told the star, "Careful with the politics Iggy," prompting her to snap.

"I hate Donald trump and if you like him: I hate you too (sic)," she retorted.

It's not the first time the outspoken rapper has made her feelings about the American leader clear. She previously called him out in her 2017 "Mo Bounce" music video, in which she sported shorts featuring the inscription: "My p**sy grabs back."

The statement was a reference to leaked audio comments by Trump that surfaced in 2016, in which he boasted of grabbing women "by the p**sy".

Her political tweets aside, Iggy is cooking up some new music. The mother of one is going to release "End of an Era", which is planned to come out in 2021. The album was initially set to arrive over the summer but it's getting pushed back to the next year.