The 34-year-old 'Transformers' actress slams the 'Beverly Hills, 90210' actor for 'feeding the pervasive narrative that I'm an absent mother' with his recent Instagram post featuring him and their son.

AceShowbiz - Megan Fox is clearly not happy with what Brian Austin Green posted on his social media account. After her estranged husband shared a shady Halloween picture of him with their son Journey River, the "Transformers" actress was quick to voice her disapproval over his post.

The Instagram photo at issue was initially posted by the former "Beverly Hills, 90210" star on Sunday, November 1. In the picture, the 47-year-old was seen wearing a white onesie while standing next to their 4-year-old son. In accompaniment of the photo, he wrote, "Hope you all had a good Halloween!!"

Fuming over the exposure, Megan slammed Brian in the comment section. "Why does Journey have to be in this picture? It's not hard to crop them out. Or choose photos that they aren't in," she argued. "I had a great halloween with them yesterday, and yet notice how absent they are from my social media. I know you love your kids. But I don't know why you can't stop using them to posture [sic] via Instagram."

"You're so intoxicated with feeding the pervasive narrative that I'm an absent mother, and you are the perennial, eternally dedicated dad of the year," the girlfriend of Machine Gun Kelly went on to add. "You have them half of the time. Congratulations you truly are a remarkable human! Why do you need the internet to echo back to you what should be inexhaustibly evident in the way your children love you?" 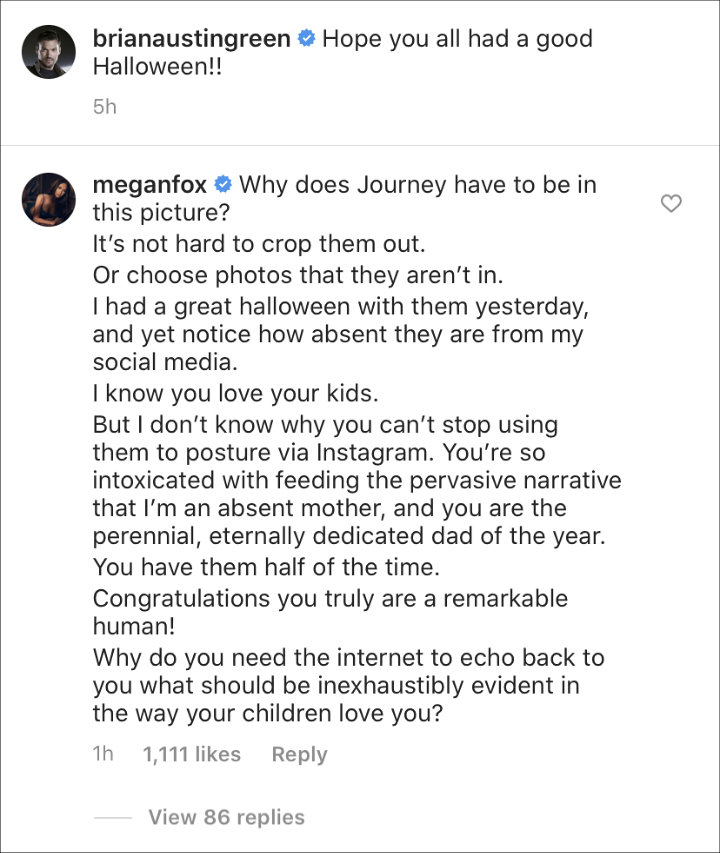 Shortly after Megan expressed her anger publicly, Brian deleted his post but uploaded a cropped version of the deleted photo. While the new post only displayed he himself, he did not change the caption he prepared for the first one as he noted, "Hope you all had a happy Halloween!!!"

Megan's clapback to Brian seemed to have prompted his other ex, Vanessa Marcil, to also throw a shade at the actor. She let out a note on her Instagram page that read, "Like I said... the truth always comes out in the end...." She captioned the writing with the hashtag #ImWithYouSister."

Brian has yet to respond to the attacks from both Megan and Vanessa.