Tunechi appears to show his support for Donald Trump in a Twitter post featuring a photo from his 'great meeting' with the president to discuss the Platinum Plan.

AceShowbiz - Lil Wayne has made his political choice be known, but not everybody is appreciating his voice. The rapper has been widely criticized by fellow celebrities and others after appearing to show his support for Donald Trump.

On Thursday, October 29, Tunechi posted on Twitter a picture of him posing with the president. They both flashed a smile while giving a thumbs-up. Clearly proud of it, he wrote in the caption, "Just had a great meeting with @realdonaldtrump @potus."

He went on gushing about POTUS and his Platinum Plan, "besides what he's done so far with criminal reform, the platinum plan is going to give the community real ownership. He listened to what we had to say today and assured he will and can get it done." 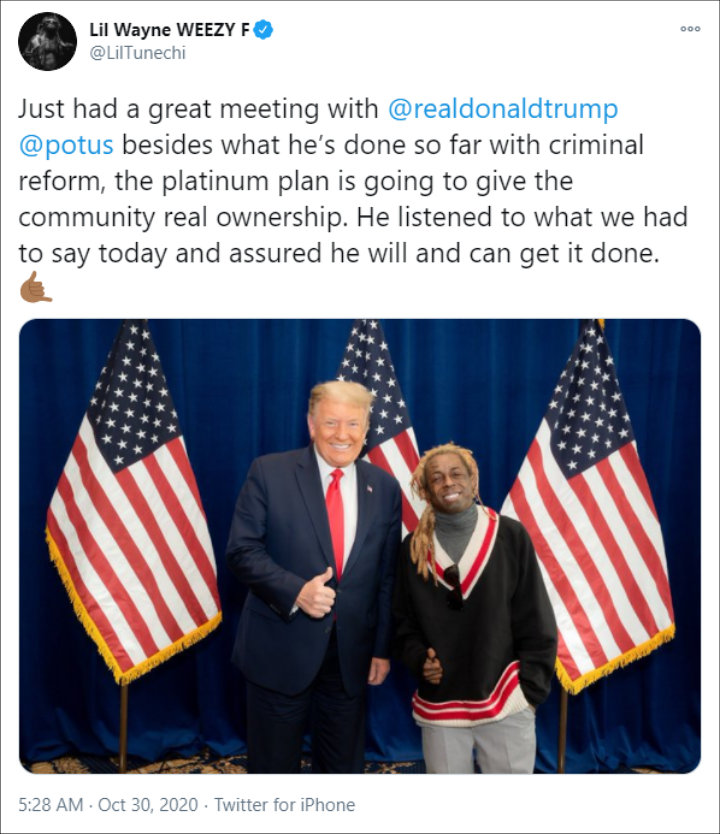 Shortly after his tweet went viral, 50 Cent, who was earlier slammed for joking about endorsing Trump before making a slick maneuver, weighed in on it. Thinking that the "Lollipop" hitmaker made the wrong move, the "Power" star wrote on Instagram, "oh no WAYNE, I WOULD HAVE NEVER TOOK THIS PICTURE."

Lil Jon also showed his strong disagreement with Tunechi's political views, tweeting, "HOW ABOUT F****** NOOOOOO." Meanwhile, journalist Roland Martin didn't hold back in calling out the 38-year-old rap star. "Let me as clear as possible: Lil Wayne @LilTunechi is STUPID AF for posting this," he wrote. "His analysis of Trump's Platinum Plan is stuck on stupid. I would hope these other rappers like @KillerMike @SnoopDogg @Tip would cuss this fool out for being a dumb a**. If I had his # I would!"

Similar to Martin, a Twitter user blasted Wayne in response to his tweet, "You're a f**king idiot, dude." Another questioned the rapper's opinion on Trump's views on white supremacist, "What do you think about 45 not condemning white supremacy during the debate???"

Another claimed Trump is only using Tunechi to win over black people. "Did you ask him why he decided to meet w/ you less than a week before Election Day? When are some of y'all gonna learn? You're not a high priority if someone takes a meeting with you 5 days prior to an election; but you jumped at the opporcoonity to be used," the said person wrote. Another declared, "my hood is NOT listening to Lil Wayne anymore."

Wayne has not responded to the backlash.