The comedian and actress blasts her rapper ex-boyfriend after he defends his decision to vote for the current POTUS in the upcoming presidential election despite backlash.

AceShowbiz - Chelsea Handler used to consider 50 Cent as her favorite ex-boyfriend, but that thought is apparently no more ever since the rapper made his support for Donald Trump public. The actress and comedian blasted Fiddy on Tuesday, October 20 after he defended his decision to support the current POTUS in the upcoming election.

In response to people who made fun of his name after he criticized Joe Biden's alleged tax plans, Fiddy quipped on Twitter, "Yeah, i don't want to be 20cent. 62% is a very, very,bad idea." He then added, "i don't like it !" His post naturally garnered attention with many people slamming him for refusing to pay high tax despite being rich, and Chelsea was one of them.

Right underneath his tweet, the "Chelsea Lately" alum said, "You used to be my favorite ex-boyfriend." 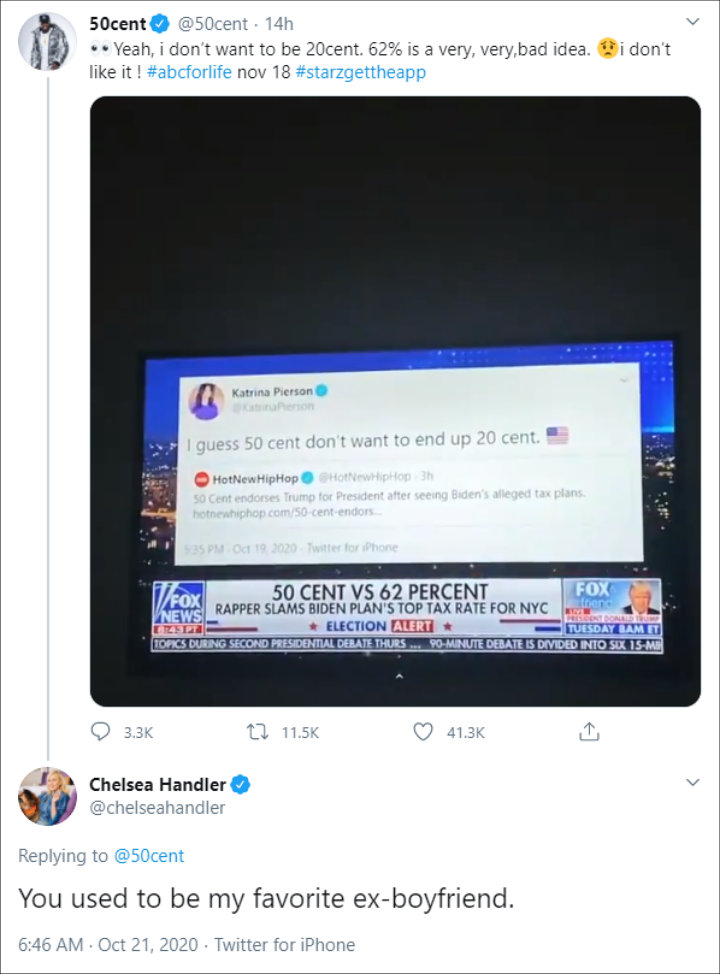 Fiddy and Chelsea briefly dated for a few months in 2010 before going their separate ways. During an interview with Howard Stern after their split, the latter revealed that the reason behind their split indirectly had something to do with one of his exes, Ciara. According to her, when the songstress came to her show, Fiddy "called me to tell me something about her like she still calls him all the time, and she still tells him that she loves him or something."

This did not sit well with Chelsea. "I'm at my job, and I go 'Curtis, honestly this is like eighth grade s**t. Why are you telling me this? This girl is coming on the show tomorrow, and now I have to look at her and think you guys have some weird thing going on or had going on," she recalled during the interview, adding that the phone call he had with Fiddy at the time was the last straw before they decided to part ways.