Halsey Shaves Her Head Because She Misses Being Bald - See Her New Look!

The 'Without Me' singer debuts her new hairstyle through a TikTok video, using a viral sound that many creators on the social media site use to debut their bold haircut.

AceShowbiz - Halsey is no stranger to drastic hair changes throughout the years, but she managed to stun her fans with her latest transformation. On Monday, October 19, the "Without Me" hitmaker proudly debuted her new buzz cut on social media, claiming that the shaving off was caused by her missing being bald.

The 26-year-old singer and songwriter first made use of her TikTok account to share a video of her hair transformation. Alongside a viral sound that many creators on the social media site use to debut their bold haircut, she flipped her long locks to show off a clean-shaven scalp. In the caption of the clip, she simply noted, "I did it."

The "Closer" songstress' post was quick to gather positive feedback from many of her online devotees. One individual raved, "BALDSEY IS BACK OMG." Another user gushed, "IT SUITS YOU SO WELL WHAT." A third one praised, "YOU ACTUALLY DID IT WHAT A POWER MOVE."

Hours afterward, Halsey took to Twitter to explain the real reason why she went for the bald look. When one of her followers asked about her decision, she dished, "I was growing it out for so long and I told myself I wouldn't shave it till I saw what it was like healthy and long and then I saw it healthy and long and said 'mm this is nice but I miss bald.' and then so I did it!" 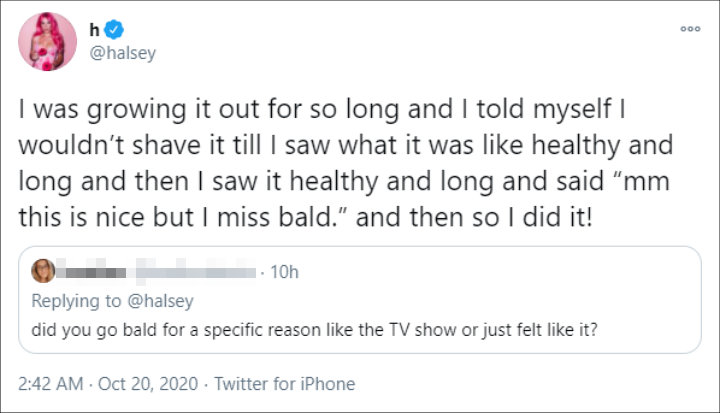 Halsey explained why she opted for a bald look.

Days before debuting her bold new look, the ex-girlfriend of G-Eazy did leave a hint on the microblogging site that she was thinking of going bald again. On October 15, she tweeted, "when I was bald everybody was so damn mean to mean now every hot girl ever has a bald head does that mean I can go bald again or what."

Halsey hinted that she was thinking of going bald again.

This was not the first time Halsey shaved her head clean. Having rocked a buzzcut in 2015, she explained to Nylon in 2016, "Hair has also been a big indicator of racial issues in my life. It's one of the ultimate symbolic struggles for women of color. Shaving my head was important to me because I needed to be able to prove that I could still love myself if I did it."