The 78-year-old singer's longtime manager Jim Morey remembers the country legend as 'a loving husband, father, grandfather and friend,' after Travis Tritt broke the sad news of his passing.

AceShowbiz - Mac Davis, the singer and songwriter behind Elvis Presley's hits "In the Ghetto" and "A Little Less Conversation", has died following heart surgery.

The 78-year-old passed away on Tuesday night, September 29.

"I will miss laughing about our misadventures on the road and his insightful sense of humor," Morey wrote in a statement.

Davis' songs were also recorded by Kenny Rogers, Dolly Parton, Glen Campbell, Tom Jones and Johnny Cash, and he tasted solo success himself with the hits "Baby Don't Get Hooked on Me", "Stop and Smell the Roses" and "Rock N Roll (I Gave You the Best Years of My Life)".

Mac, who also fronted his own U.S. TV variety series in the mid-1970s, was named Entertainer of the Year at the Academy of Country Music Awards in 1974.

The Texan was hospitalized after falling ill recently and Morey asked fans for their prayers via Facebook over the weekend, September 26-27.

Parton picked up on the messages of support and asked her fans to keep her friend in their thoughts.

She retweeted the hashtag "#PrayForMacDavis" and the message, "We are sorry to report that legendary singer/songwriter Mac Davis is critically ill following heart surgery in Nashville. Your love and prayers will be deeply appreciated at this time." 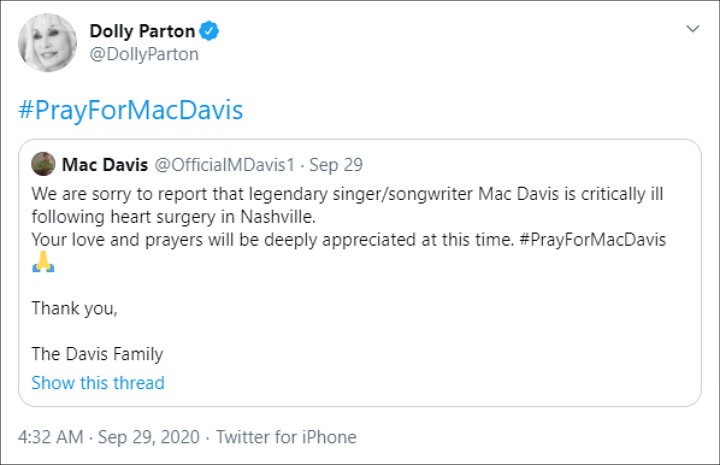