AceShowbiz - Katy Perry has poked fun at herself as she showed the reality of motherhood. While other artists and musicians showed up in over-the-top outfits for the 2020 MTV Video Music Awards on Sunday, August 30, the new mom bared her post-baby body in a new selfie of her mock red carpet look.

Taking to her Instagram Stories, the 35-year-old star shared the picture featuring her sporting a nude nursing bra and a pair of gray high-waisted underwear as she posed in her bathroom mirror. "Hair n makeup by: @exhaustion," she jokingly wrote over the photo.

The "Firework" songstress also tagged the brands where her breast pump and postpartum underwear are from. She set the photo to her song "Not the End of the World", which part of the lyrics read, "It's not the end of the world, throw on your fancy attire, fears to the fire, don't lose hope." 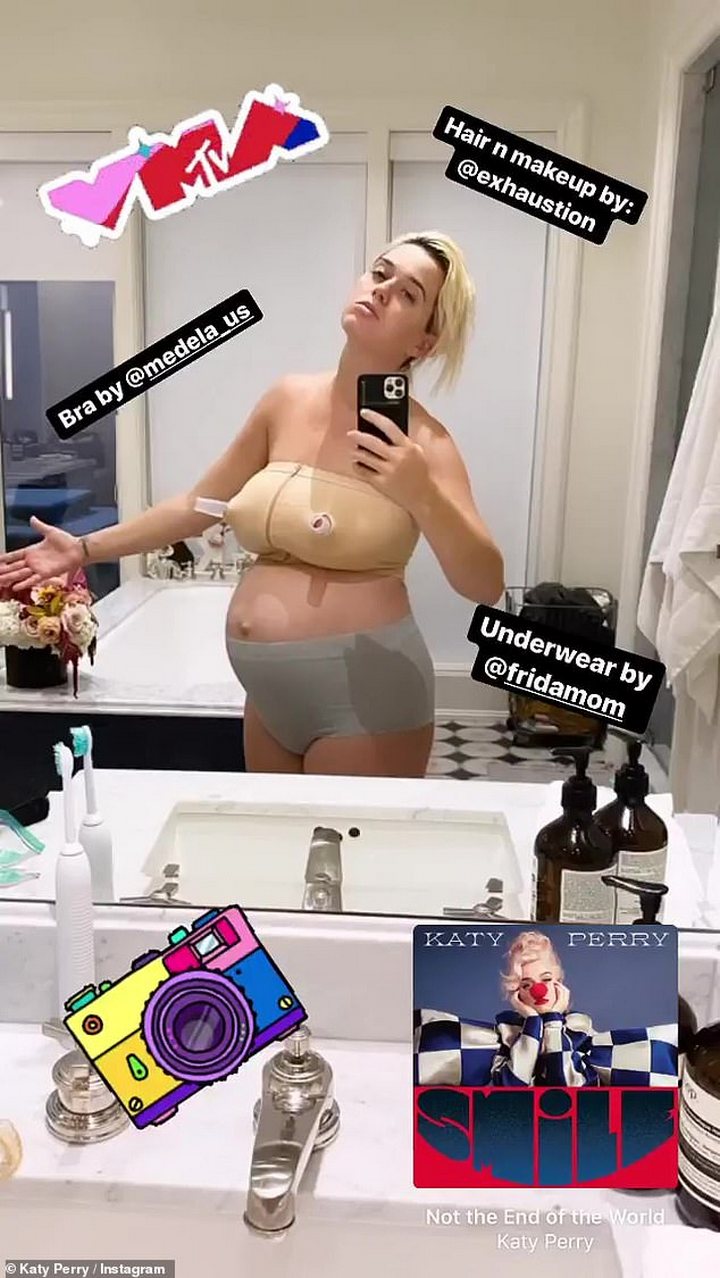 Katy shared the new mirror selfie just five days after giving birth to her daughter with Orlando Bloom, Daisy Dove Bloom, on August 26. The baby girl is her first child and the second for her fiance, who is also a father to nine-year-old son Flynn with his ex-wife Miranda Kerr.

The couple announced their daughter's arrival via UNICEF and turned their joy into an opportunity to raise awareness and funds for the health and safety of pregnant women and newborns. "We know we're the lucky ones and not everyone can have a birthing experience as peaceful as ours was," they said in a statement.

"Communities around the world are still experiencing a shortage of healthcare workers and every eleven seconds a pregnant woman or newborn dies, mostly from preventable causes," the couple continued. "Since COVID-19 many more newborn lives are at risk because of the increased lack of access to water, soap, vaccines and medicines that prevent diseases. As parents to a newborn, this breaks our hearts, as we empathize with struggling parents now more than ever."

The parents also announced the launch of a donation page in their daughter's name, "In celebration of the heart we know our daughter already has, we have set up a donation page to celebrate DDB's arrival. By supporting them, you are supporting a safe start to life and reimagining a healthier world for every child. We hope your [heart] can bloom with generosity."

Katy Perry Issues Public Apology to Kim Kardashian Because of This