Britney herself is now seeking to have her longtime care-giver, Jodi Montgomery, replace her father, Jamie Spears, as the sole conservator overseeing her financial affairs and wellbeing.

AceShowbiz - Cher has taken to Twitter to accuse the people behind Britney Spears' conservatorship of treating the "Toxic" star like a "cash cow".

The 74-year-old music legend took to social media after Britney's legal arrangement was formally extended into 2021 following a court hearing this month, as she questioned the motive behind the conservatorship.

"She worked hard, was the golden goose, made lots of $$, got sick, now she's the CASH COW," the "Believe" star tweeted. "Does anyone who's making (money) off her being sick want her well?"

She ended her post with three duck emojis, asking: "Is it a duck?" 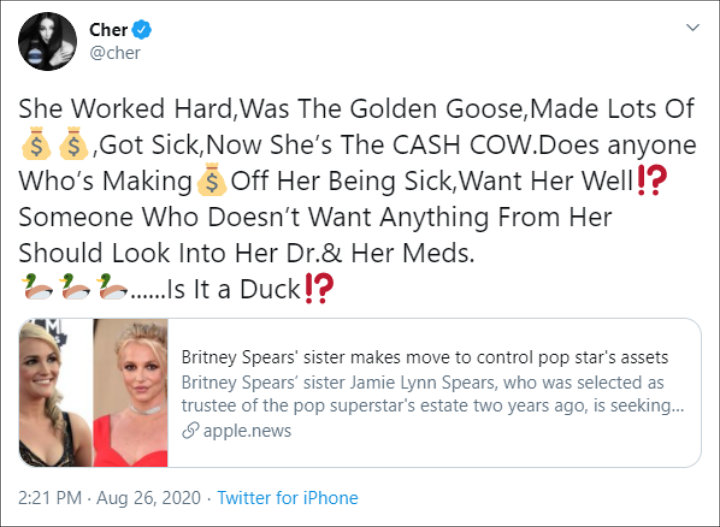 Cher accused the people behind Britney Spears' conservatorship of treating her like a 'cash cow'.
See also...

The "Toxic" star's dad Jamie was put in charge of his daughter's welfare and finances in 2008, following the superstar's headline-grabbing meltdown. He relinquished some control last year (19) as he battled ill health and passed things over to Britney's longtime care-giver, Jodi Montgomery.

It's not the first time the "All or Nothing" hitmaker has questioned the conservatorship - in January, Cher questioned why Britney is allowed to work when she is considered legally unfit to run her own finances.

"Why is a woman being worked if it's known she's not well enough to care for herself?," she asked.

The conservatorship has proved unpopular among fans, who have taken to social media with the #FreeBritney campaign, demanding the legal arrangement be scrapped.

Britney herself is now seeking to have Montgomery replace Jamie as the sole conservator overseeing her financial affairs and wellbeing. While her bid was refused in court earlier this month, Spears' attorney has filed an appeal.