While Jill was raised by homeschooling, the 'Counting On' star and husband Derick Dillard make a surprising decision by sending their eldest son Israel to public school.

AceShowbiz - The tension between Jill Duggar and her family seemingly has yet to be over. Having decided to enroll her son to public school, the "Counting On" star appeared to take a low-key dig at her parents and siblings for not showing some support over Israel's first day of kindergarten.

The 29-year-old took to her Instagram story on Monday, August 24, to express gratitude to those caring about her son. "Feeling loved and blessed by so many friends who've reached out and sent their prayers up for a wonderful first day of school for Israel! Y'all know who you are!" she wrote in the post.

"I've definitely felt peace, and the day has been wonderful so far," the wife of Derick Dillard continued while still leaving out any member of her big family. "Can't wait to hear all about his day when we pick him up!" 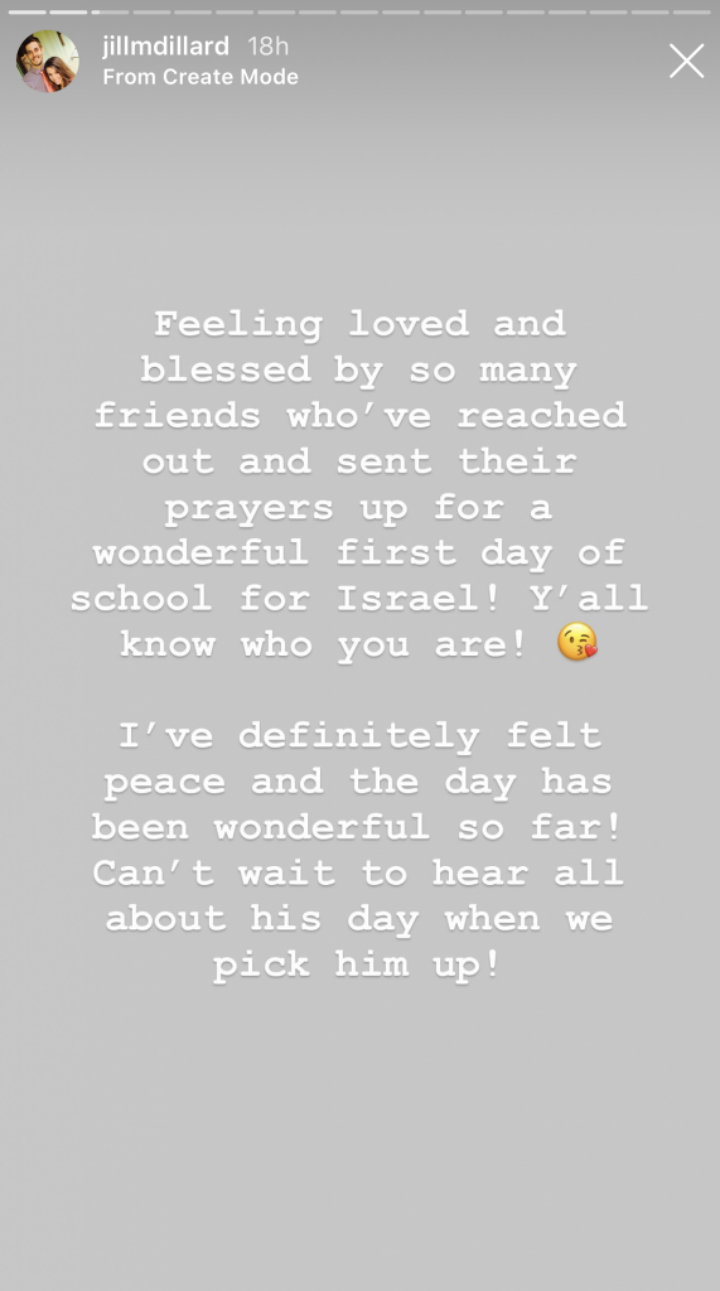 Jill Duggar thanked her friends for wishing her son Israel luck for his first day of school.

Earlier on the same day, the TLC star uploaded an Instagram photo of her 5-year-old posing with her husband before going to school for the first time. "Happy first day of school for these two," she wrote in the accompanying message. "1st day of Kindergarten for Israel and 1st day of last year of law school for Derick!"

The former star of "19 Kids and Counting" received well wishes from many of her fans and followers. None of her siblings nor her parents, however, could be seen leaving a supportive message. One family member showing support for Jill was her cousin Amy Duggar King. The niece of Jim Bob Duggar and Michelle Duggar, who had spoken out against the famous family in the past, commented on the post, "Cutie!"

Jill revealed back in February that she and her husband broke her conservative family's homeschooling tradition by registering Israel to public kindergarten. Along with an Instagram photo of her oldest boy smiling ear to ear, she wrote at the time, "Look who's registered for kindergarten!"

Jill and her husband Derick left "Counting On" back in 2017 after he got cut from the show for making a transphobic comment about Jazz Jennings. The tension grew between the couple and her family in recent months as Derick claimed that they were not allowed in the family compound when Jim Bob is not around. "I think he's mainly worried about the influence we might have on his children," he told The Sun in June.

DaniLeigh Is Trolled as DaBaby Flirts With Baby Mama on Twitter

Porsha Williams, Yandy Smith and 62 Others Arrested at Louisville Protest

Jill Duggar Reveals Her and Husband's Rift With Her Family: 'We've Had Some Disagreements'