In addition to 'On Becoming a God in Central Florida' star, the collage picture that Ye posts on Twitter features an image of fashion icon and Vogue Editor-in-Chief Anna Wintour

AceShowbiz - Kirsten Dunst has a lot of questions regarding Kanye West's recent Twitter post. On Wednesday, August 19, the "Gold Digger" rapper, who has been vocal about his presidential bid, shared a picture of his campaign that featured the actress' face, much to her own confusion.

In addition to "On Becoming a God in Central Florida" star, the collage picture featured an image of fashion icon and Vogue Editor-in-Chief Anna Wintour alongside messages that read, "KANYE 2020 VISION." Captioning the post, the controversial rapper wrote, "#2020VISION."

The post went unnoticed by Kirsten until she caught wind of the tweet on Thursday. Replying to Ye's post, she wrote, "What's the message here, and why am I part of it?" The photo of Kirsten that Ye used was originally an old Vanity Fair profile taken in 2002. The Yeezy founder has yet to respond to Kirsten's question. 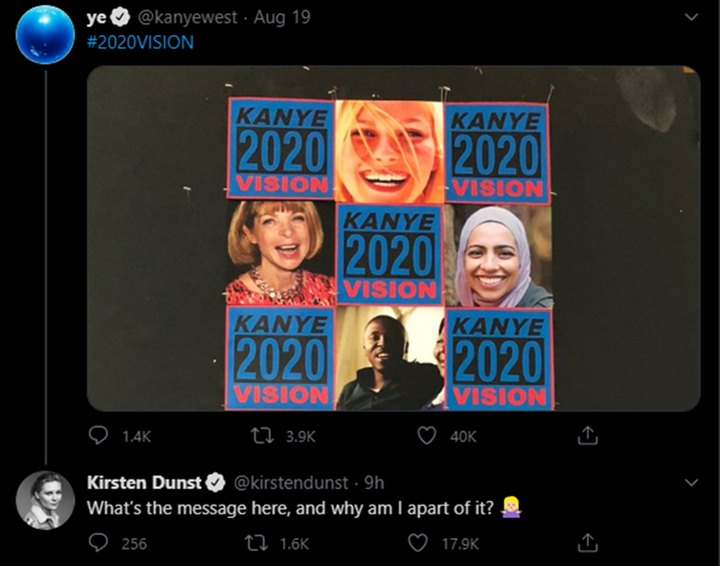 Kanye is no stranger to controversy. The husband of Kim Kardashian recently sparked chatter after he revealed that he hung out with Steve Harvey at Chick-Fil-A. "Me and Steve Harvey was hungry," Kanye wrote along with a photo of the "Family Feud" host sitting inside the restaurant.

In another post, Ye shared a video of the CEO and Senior Vice President of the restaurant singing grace in the middle of the spot. "Dan and Bubba Cathy giving grace at Chick Fil A," he captioned it.

It didn't take long before Ye's tweets attracted a lot of comments from social media users. Their reactions were varied, from those who criticized his grammar error to some others who think that his interaction with Steve and the Chick Fil A owners were awkward.

"Was hungry?" one person pointed out at the 43-year-old's grammar error in his tweet. Another corrected the Yeezy designer, "Steve Harvey and I were hungry." A third one mocked Ye, "He's trying to be president and can't even use proper grammar? Lol."