After Cher reveals that she gets denied by USPS, a spokesperson for the organization says in a statement, 'But there are many opportunities for employment at the Postal Service.'

AceShowbiz - Cher could not help but be left disappointed by how the United States Postal Service reacted to her volunteering offer. Amid the growing concerns over the controversial changes within the agency, the "If I Could Turn Back Time" hitmaker expressed her interest to do some free services, but was met with a rejection.

On Wednesday, August 19, the 74-year-old first ran down her idea with her Twitter followers. "Can ppl volunteer at post office!?" she asked. When she seemingly did not receive satisfactory responses, she inquired again, "NO,IM NO KIDDING…COULD I VOLUNTEER AT MY POST OFFICE !?" Minutes later, she reiterated, "IS NO ONE GOING TO HELP ME WITH POST OFFICE." 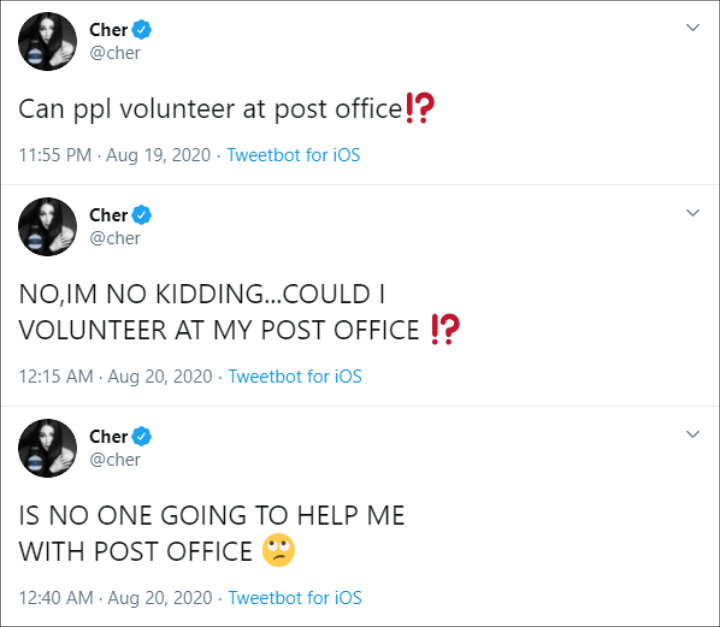 It was not until around one hour after her last post that the music icon updated her fans that she had reached out personally to two post offices in Malibu, California. "OK,Called 2 post offices In Malibu.They were polite," she tweeted. "I Said'Hi This Is Cher,& I Would like to know If you ever take Volunteers!?' "

The "Mamma Mia! Here We Go Again" actress, however, was not met with a response she hoped for. "Lady Said She Didn't Know & Gave Me # Of Supervisor," she continued dishing in the same tweet. "I Called & Said Hi This is Cher Do U Accept volunteers.'NO,Need Fingerprints & Background Check.' " 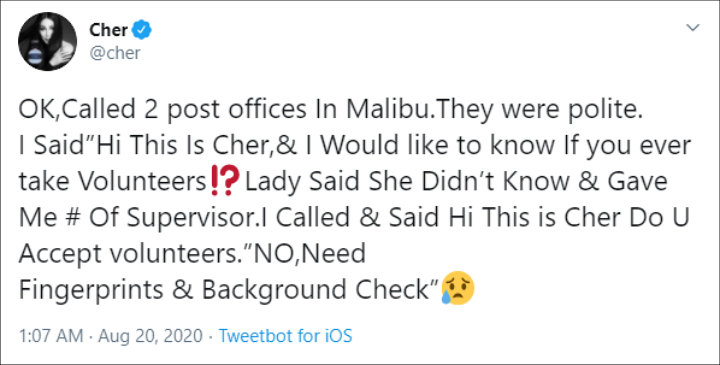 Cheer showed off her disappointment after being turned down by USPS.
See also...

In the wake of Cher's public revelation, a representative for the USPS confirmed that the institution does not accept volunteers. Nevertheless, the rep did point out that "there are many opportunities for employment at the Postal Service, including seasonal hiring."

American Postal Workers Union, on the other hand, reached out to Cher directly via Twitter about her potential involvement. "Thank you for standing up for the USPS! If you'd like to DM us, we'd love to talk about how you can get more involved," the mail workers' representative tweeted.

Cher's interest in providing free service to the USPS came days after President Donald Trump suggested that he would reject a $25 billion emergency funding grant as he attacked mail-in voting amid the COVID-19 pandemic. Postmaster General Louis DeJoy had also made major cost-cutting changes using the reason of improving efficiency, before reversing his decision and put the changes in suspension until after the November 3 election.

The Goddess of Pop was not the only celebrities voicing her support for the Postal Service ahead of the presidential election. Fellow singer Jason Mraz advised his Instagram followers, "Do not think for a minute that this time tested system would fail us during an election."

"A government by & for the people would make sure the postal service is running at full capacity instead of closing branches and turning off AUTOMATED sorting machines which make sorting faster and easier," he continued, "but - suspiciously, we have an administration trying to undermine the hardworking service men & women who make the USPS possible."