The 'All of Me' hitmaker and his model wife went public with the news that they are expecting another child together through a music video of his new single, 'Wild'.

AceShowbiz - John Legend has branded his wife Chrissy Teigen's third pregnancy a "quarantine surprise" because they hadn't actively been trying to expand their family.

The couple went public with the happy news on Thursday, August 13, by debuting Chrissy's growing baby bump in the new music video for John's single, "Wild".

The model, TV personality, and cookbook author, who has been open about her previous fertility struggles, underwent in vitro fertilisation to conceive their four-year-old daughter Luna and two-year-old son Miles, but this time around, the pregnancy was unplanned - and John jokes it's all because of the coronavirus pandemic, which forced the singer to scrap all touring and promotional plans.

"It was a surprise. A little quarantine surprise, I guess you could say," John smiled on U.S. breakfast show "Today".

"But we're very excited, and we're grateful for all the well-wishes we've gotten from people all around the world. Thank you so much."

Over the weekend, August 15, Chrissy revealed her shock and worry at her pregnancy, because a test she had taken just before going under the knife to have her breast implants removed in June came back false negative - and she ended up testing positive just a week after surgery.

"I was scared s**tless," she admitted in a series of Twitter posts. "Was pretty positive you shouldn't get your boobs out while pregnant? Pretty sure."

"So we prayed to the boob surgery gods that everything would be okay. Went to every (ultrasound) appointment terrified. Even without the surgery, I didn't think I could get pregnant naturally anyway...

"But what they say so often can be true. When you give up on trying, life has a way of surprising you." 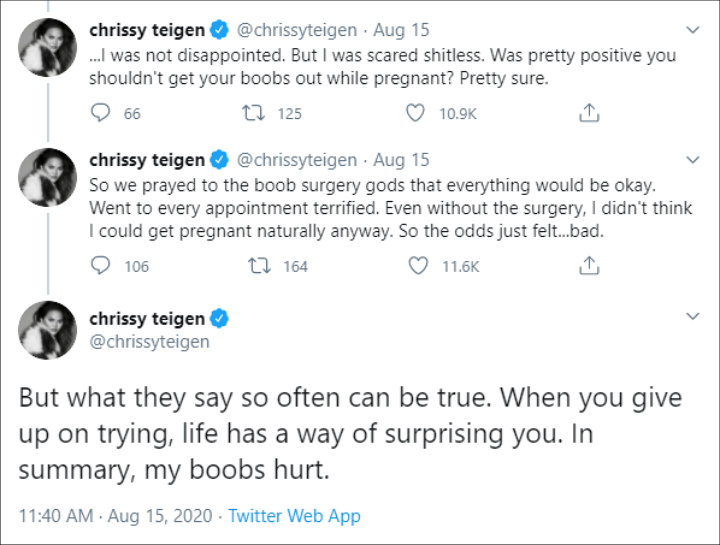 Chrissy Teigen shared her shock and worry at her surprise third pregnancy.

Chrissy also revealed she was left speechless at the positive pregnancy stick, and couldn't summon the words to express her emotions to John when she shared the news with him.

"I always had this big plan or picture of how I'd do it. Screaming, crying," she tweeted. "But it wasn't that at all! Just shock. Just handed it to him with my mouth open." 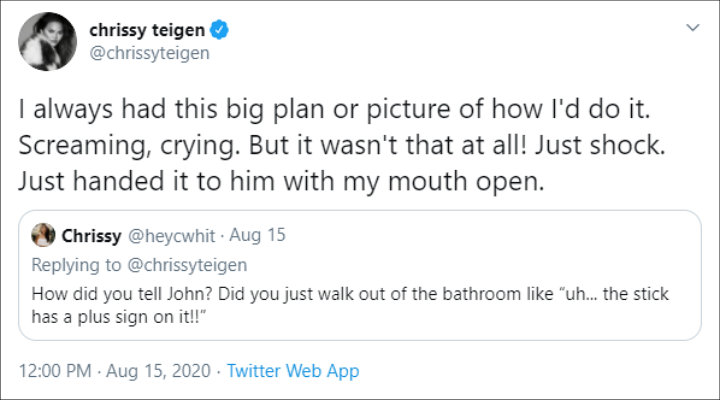 Chrissy Teigen spilled her initial reaction upon learning about the pregnancy.

The couple, which wed in 2013, has yet to pinpoint Chrissy's due date.